Almost two years removed from a severe shortage of propane, the United States is currently sitting on a record inventory, according to the U.S. Energy Information Administration (EIA), which said nearly all of the stockpiled increase for the past year came from six Gulf Coast states. 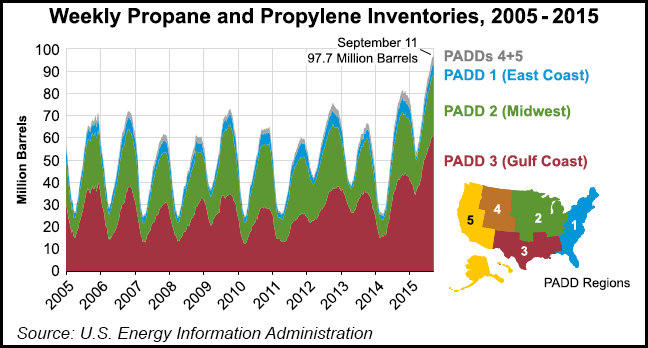 In a Today in Energy note released Monday, the EIA said U.S. inventories of propane and propylene reached 97.7 million bbl on Sept. 11, the highest level for the 22 years that the agency has been recording weekly propane inventory statistics.

Nearly all of the increase in inventories occurred in the Gulf Coast region — Alabama, Arkansas, Louisiana, Mississippi, New Mexico and Texas. The region is home to several shale plays, notably the Barnett, Eagle Ford, Fayetteville and Haynesville shales and the Permian Basin.

“Expanding shale gas and tight oil development continues to be the main driver of propane production growth, with refinery propane production remaining relatively constant,” the EIA said, adding that the natural gas plant share for annual production rose from 62% in 2008 to 76% in 2014.

The end of September traditionally marks the end of the cyclical filling period for propane and propylene, which starts at the beginning of April. Stocks are usually drawn down from the beginning of October through the end of March. But the EIA said that in 2015, inventories began to climb in mid-February, six weeks earlier than usual.

During the winter of 2013-2014, propane supplies plummeted and prices spiked after exports to Europe, Asia and Latin America increased, but so did the domestic demand for heating during the polar vortex (see Shale Daily, Feb. 10, 2014). At the time, the Federal Energy Regulatory Commission invoked its emergency authority under the Interstate Commerce Act to redirect shipments within the U.S. to help alleviate “dangerously low” propane supplies to consumers in the Midwest and Northeast.