An early spring thaw — or break-up season as it’s known in Canada — has slowed work in the country’s oil patch, improving the odds that it will be a down year for drilling, according to energy experts.

The Canadian Association of Oilwell Drilling Contractors (CAODC) reported that the warm weather has made many of the Alberta natural gas drilling sites inaccessible to heavy equipment. Producers are not prevented from drilling in the spring, but as the ground has thawed, many municipalities have enacted bans on the use of muddy roads, which prevent companies from moving large drilling equipment to inaccessible gas basins. The CAODC reported that 491 rigs were working last week in Canada, down from 565 two weeks ago and sharply below the 731 rigs working during the same period of 2006.

Besides the early slowdown in drilling, the industry now faces a double whammy as it struggles to find and retain a skilled workforce, according to the CAODC. “People are at a premium,” said CAODC President Don Herring. The energy sector is now competing with other Canadian industries that are “running at capacity,” which gives people more options, he said.

“It’s bad news on top of an already gloomy situation for drillers,” said Raymond James and Associates energy analyst Stephen Calderwood, who is based in Calgary. “This slows down all activity. Companies that were hoping to squeeze in more drilling before the spring are being cut off.” Producers are “struggling to find new reserves,” but because of the drilling delays, Calderwood said “it makes a lot of sense for them to drill less wells and consider making acquisitions instead.”

Tristone Capital’s John Tasdemir, who is also based in Calgary, said the “early break-up season is particularly disappointing for those firms who were hoping and expecting decent cash flow generation in the first quarter.” The “larger firms will mostly be able to cope, but the smaller companies will take this on the chin.”

Producers are facing another potential problem, said Tasdemir. There appears to be more snow on the ground than usual, which prolongs the thaw and prevents operators from resuming operations quickly.

“The question now is when is this going to end,” said Tasdemir. “Drillers are talking about seeing a ton of snow out there, and that’s all got to melt and dry up before the land can be drilled again.” 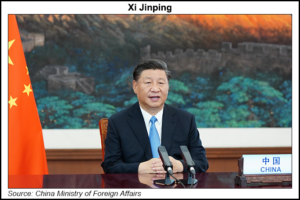 China is aiming to achieve peak carbon dioxide (CO2) emissions before 2030 and carbon neutrality before 2060, President Xi Jinping said Wednesday. In an address to the United Nations (UN) General Assembly focused largely on the need for a coordinated global response to the Covid-19 pandemic, Xi said China will scale up its Intended Nationally…