ConocoPhillips executives said most of the company’s production growth during 3Q2013 came from shale plays in the Lower 48 — especially the Eagle Ford and the Bakken — and predicted “significant growth and very high margin growth” from the Eagle Ford for several more years. 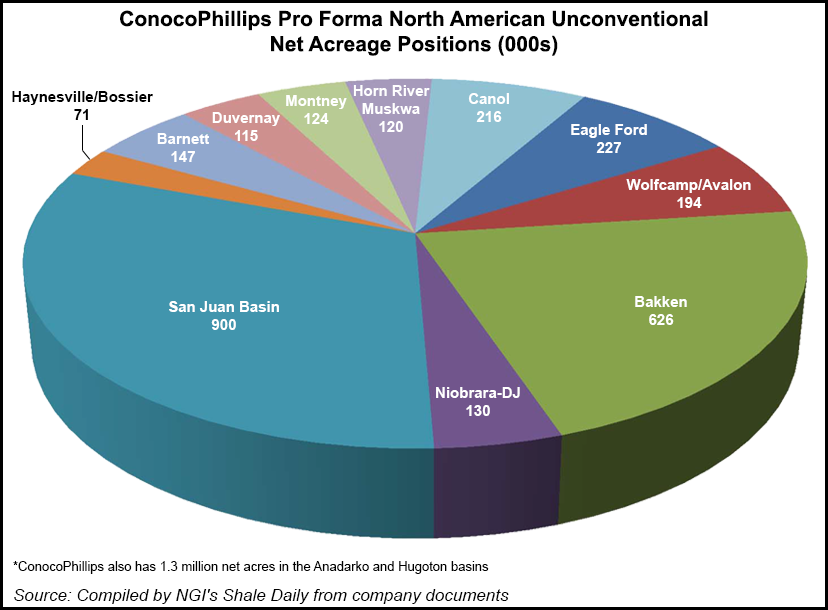 Matt Fox, executive vice president for exploration and production, told financial analysts during a 3Q2013 conference call Thursday that the “big milestone” for the company during the quarter was reaching production of 500,000 boe/d in the Lower 48.

“Of course, this is largely due to performance from the unconventionals in the Eagle Ford and the Bakken, but [also] continuing good performance from the Permian conventional program,” Fox said. “Our focus during the third quarter was in the time from drilling a layout to bringing on production. This continues to be a focus and will become even more important as we shift to pad drilling.”

“As we head into 2014, we are in full transition to multi-well pad drilling and more than 1,800 remaining identified well locations, assuming an 80-acre well spacing,” Fox said. “We expect to see more variability in the quarterly production levels as we move to pad drilling, but we anticipate continued growth in this asset next year.”

Fox said ConocoPhillips had identified and ranked several nearby prospects, and hopes to drill on them by mid-2014. The company is also discussing additional unconventional plays in North America, including the Permian Basin, where the company is currently testing prospective zones across the Delaware and Midland basins. ConocoPhillips also has one rig deployed in the Niobrara Shale, executing an appraisal program.

“It’s too early to discuss results in the Permian and Niobrara, but we’re encouraged by the preliminary results,” Fox said.

During the Q&A session, Fox said the company was “very excited, and getting more excited” about its position in the Eagle Ford and would continue with its 11-rig drilling program there.

“We have pilot tests under way to determine if [80-acre spacing] is the right spacing,” Fox said. “That may ultimately tighten up and there will be more drilling locations. We are also looking at other levels in the Eagle Ford and for potential, too.

“We are still very excited about the Eagle Ford position, and we’re going to see significant growth and very high margin growth from the Eagle Ford for several years to come.”

Fox added that the company could consider accelerating its drilling program in the Eagle Ford.

“We’re continuing to see learning curve improvements, and we want to take advantage of that before we ramp up. We want to get results from the many pilot tests we are running in the Eagle Ford, too. We’re making sure we’re investing in capital as efficiently as we can.”

Elsewhere, Fox said ConocoPhillips would continue operating one rig in the Niobrara Shale, at least through the end of 2014.

“At the end of 2014, we’ll really know the scale and the scope of our Niobrara development, and that’s when we’ll make the development decision [and decide what the] characteristics of that will be,” Fox said. “The same really applies in the Permian as well. We’ll go through and test our portfolio there.”

Excluding special items (including the sale of the Clyden undeveloped oilsands leasehold in Canada, and the Phoenix Park midstream asset in Trinidad and Tobago) adjusted earnings in 3Q2013 totaled $1.8 billion ($1.47/share), a 5.8% increase from 3Q2012, when the company reported adjusted earnings of $1.7 billion ($1.38/share).

In August, ConocoPhillips said combined production in the Bakken, Eagle Ford and Permian in the second quarter of 2013 had nearly doubled in a year (see Shale Daily, Aug. 5).

ConocoPhillips is expected to announce its capital expenditure and production budgets for 2014 in early December.