ConocoPhillips saw its combined production in the Permian Basin, Eagle Ford and Bakken shales nearly double during 2Q2013, and it expects to see future growth from its holdings as it transitions to multi-well pad drilling and experiments with tighter well spacing and hydraulic fracturing (fracking) stages. 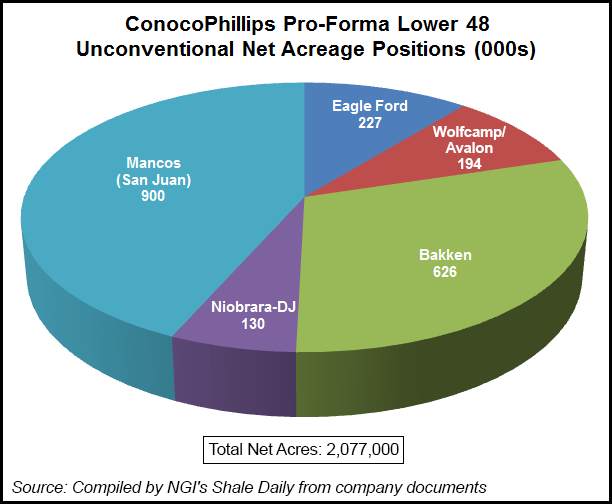 The Houston-based independent reported total production of 1.55 million boe/d, a figure adjusted to 1.51 million boe/d once production from its discontinued operations in Algeria and Nigeria were factored in. Production from the Eagle Ford, Bakken and Permian was up 47% from 2Q2012.

Matt Fox, executive vice president for exploration and production, told financial analysts during an earnings call that the company has 11 rigs deployed in both the Eagle Ford and the Bakken.

“We continue to believe that our Eagle Ford position is best in class,” Fox said Thursday. “We’re one of the top producers overall, and we’re producing higher oil volumes per well, more than 50% higher than the competitor average. So clearly we have identified the sweet spot, and we established our position for only $300/acre.

“We’re on track to complete the drilling phase of the acreage captured this year [in the Eagle Ford], and we’re transitioning to multi-well pad drilling for our more than 1,900 remaining identified locations.”

Fox said analysts should assume that the company will use 80-acre spacing for the 1,900 drilling locations identified in the Eagle Ford. “We have pilot tests running down to 40 acres, but we don’t have conclusive results yet as to what the optimum spacing might be,” Fox said. When pressed, he said more conclusive results could be available in 2014.

“We expect to see production continue to grow in the Eagle Ford, Bakken and the Permian over the next few years,” Fox added. “From an unconventional perspective, we’re seeing a lot of potential in the Permian. We’re seeing at least two producing intervals in the Avalon [Shale], and two or three in the Wolfcamp [Shale].

“Time will tell just how much that contributes to growth in the long-term, but we do expect to see growth in the Eagle Ford, Permian and the Bakken for several years to come, frankly.”

Fox said four or five of the 11 rigs deployed in the Eagle Ford were conducting pad drilling. Asked how much the company expected to save by the switch, Fox said, “I think it’s too early to put a number out there. We know that we’re seeing improved efficiencies in the pad drilling, with the fewer rig moves and all of the other benefits that come from pad drilling.”

CFO Jeff Sheets concurred. “The great part about getting to the position now, where we’ve got the Eagle Ford acreage primarily held by production, is we’ve got a lot of flexibility to step back and ask ourselves, ‘What is the optimal way to develop that field?'” Sheets said. “We’ve got a lot of work going on to do that right now.”

Despite both having 11 rigs deployed, Fox explained the disparity in production between the Eagle Ford and the Bakken was because of different levels of working interest.

“We’re monitoring the pace of activity [in the Bakken] to make sure that we don’t get ahead of infrastructure, and to make sure that we’re able to run safely and efficiently,” Fox said. “The reason you don’t see as much production appearing in the Bakken is we’ve got an average working interest of 50% or less, whereas in the Eagle Ford it’s in the high 80s and 90%.

“The underlying [production] rates from the Eagle Ford are better than the Bakken as well. Our intention is to stay around [11 rigs] for the next year or so. We’ll learn as we go. We’ll learn from our pilot tests. We may adjust that, but right now for modeling purposes I would assume [we stay at 11 rigs].”

Fox added that ConocoPhillips was “continuing to evolve in places like the Eagle Ford, for example in frack design, the number of stages and the volume of proppant that we pump. And we’re learning from our pilot tests that more stages and more proppant makes a difference, so going forward we’re going to be continuing to optimize that.”