DT Midstream has an enviable market, delivering natural gas across the United States and into Canada, but a new project in the Haynesville Shale is looking to the discriminating cadre of overseas customers that want carbon-neutral fuel. 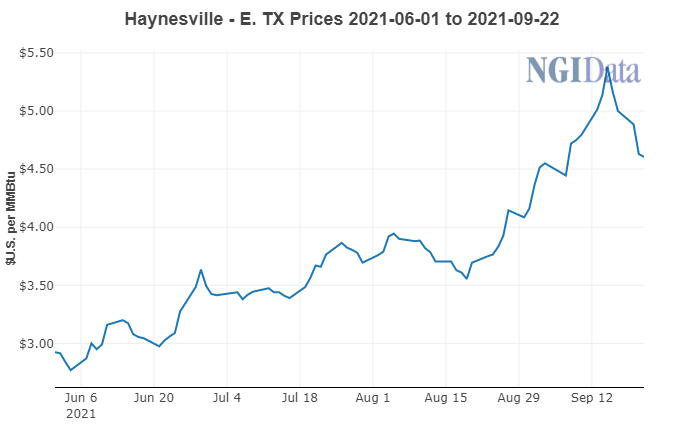 “We’re announcing a first-of-its-kind in the sector, a wellhead-to-water, carbon-neutral expansion,” Slater said. “This system can be expanded by up to 2 Bcf/d. The market that we’re targeting is all of our LNG customers, whom we currently directly tie into.”

Overseas importers “want a low-carbon LNG product. So we’re partnering with not only our producers, but our LNG customers, to really create a continuous pathway to have a verifiable low-carbon LNG source that can come out of us and serve the world market.”

Expanding the Haynesville system would move low-carbon fuel to the Gillis hub in Louisiana, a central delivery point for industrial and export supply near the Gulf Coast.

The Haynesville system is using electric compression supplied by renewable generation, Slater explained. In addition, the midstream facilities would be paired with carbon capture and storage (CCS), while carbon offsets would be used for the residual emissions.

A variety of other low-carbon options are being evaluated too, including renewable natural gas. Methane-reducing technologies under evaluation include vent control devices, electrical glycol pumps, instrument air systems, hydrogen and biosequestration offsets.

U.S. LNG growth is certain, he said, as other nations “have confidence in North America to deliver a low-carbon product.” The United States also has financial “stability,” which gives customers confidence.

“We’re very excited about this project, as everyone…knows the Haynesville is a very active area of the country that is being drilled. It’s going to be one of the key supply basins in North America for the next four decades to come.”

Expanding and improving the Haynesville system was an easy call, as companies are no longer dabbling in environmental, social and governance initiatives. The world has spoken, and it wants a carbon-free future, Slater said.

DT Midstream, which spun off of Detroit’s DTE Energy Inc. in June, is looking to capture those low-carbon opportunities when it can. And Slater knows a lot about the market and the competition.

Besides helming the midstream giant, Slater chairs the Interstate Natural Gas Association of America (INGAA). The trade group’s 27 members are involved in wellhead to burn tip activities, including LNG services, across the United States and Canada.

DT Midstream provides natural gas storage, pipeline and gathering services across the Midwest, Appalachia, Northeast and Ontario. It is aiming for a net-zero carbon future by 2050. That’s in alignment with INGAA, which committed to a similar course earlier this year.

Companies have to walk the walk, Slater said.

“It’s clearly a societal priority for us to move to a lower carbon economy,” he told the LDC Gas Forum crowd. “This journey isn’t a U.S. journey, or a North American journey. This is a global journey.”
Still, having a “reliable and resilient electric grid” is imperative “because the expectation is, when we turn the lights on, the lights come on…”

While some groups are looking to push natural gas out of the system, Slater countered that gas is a critical part of the mix today and it will be long into the future.

He cited a  study by the Midcontinent Independent System Operator (MISO) to illustrate the point.

To replace the equivalent of 100 MW of combined-cycle gas turbines, “you need 6,500 acres of solar with 560 MW of batteries…To put it into context, there’s less than 10% of that installed today in MISO.”

North America has a globally unrivaled energy delivery system, and it’s a “strategic asset for us.” Even as the energy mix changes, the grid “is enabling more intermittent renewables to come onto the system every day…We can decarbonize this network” but it’s going to be a mammoth task.

The costs to replace and electrify the U.S. power grid “is mind boggling,” Slater said. “The amount of power lines and environmental things that you have to do, it’s off the chart.”
Environmental considerations also have to be in the equation, he said, including land use and social justice regarding where updated infrastructure could be sited.

“You have to take a holistic view,” Slater said. “I think really that’s what’s been missing in the country is this holistic conversation.”

Lower income people, for example, “cannot afford massive energy cost increases. They may aspire to a lower carbon future, but again, these are forces that we have to balance…We can’t disenfranchise one-third of our population. They can’t afford what maybe many of us in this room could afford.”

For example, many U.S. utilities, including DTE Energy, offer voluntary programs giving customers the option to decarbonize their gas stream, but it comes with a cost. While it may seem to be a relatively minor cost of around $100-200 a year, not everyone can afford it.

“I think this is just going to be part of the conversation,” the DT Midstream chief said. The country has to consider “the options and the costs associated with the options to get the outcomes that we want.”

Decarbonizing the network is “not going to happen tomorrow. It will take time. We need to think about those tools that we have at our disposal to do it…It’s possible to do,” but the question is “how are we going to do this?”