President Trump rallied West Texas oil and natural gas workers on Wednesday afternoon during a visit to Midland, in the heart of the Permian Basin, touting American energy dominance and claiming the industry is not only back on track but expanding. 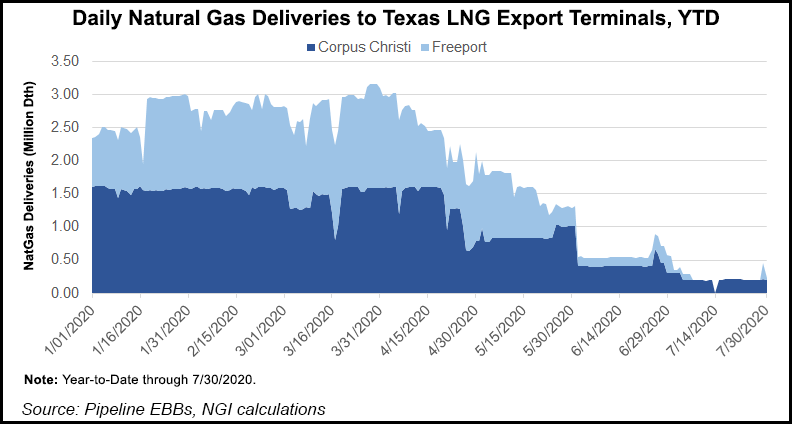 The campaign speech of sorts came during a brief visit after the president toured the Double Eagle Energy facility ahead of a GOP fundraiser.

The president touted an updated liquefied natural gas (LNG) export policy from the Department of Energy (DOE). He also signed four Presidential Permits, including one for TC Energy Corp.’s cross-border Keystone XL system, and two that move crude from Texas into Mexico.

In a speech that touched on energy, Covid-19 and what he said was an attempt by Democrats to destroy the energy industry, the president took credit for, among other things, making the United States No. 1 in oil and gas production. That distinction was in place years before he took office.

“We are telling the Washington politicians trying to abolish American energy, ‘don’t mess with Texas,’” the president said. Presumptive Democratic presidential nominee Joseph R. Biden, he predicted, would not “do too well in Texas” this November, even though recent polls indicate a neck-and-neck race in the traditionally red state.

The “radical left,” he warned, “is fighting to abolish American energy, destroy the oil and gas industries, and wipe out your jobs.”

The president also attempted to tie Biden to the ambitious Green New Deal, designed to combat climate change, which would, among other things, ban oil and gas leasing on all federal lands and abolish hydraulic fracturing (fracking).

However, Biden has not thrown his support behind the Green New Deal nor does he support a ban on fracturing techniques. The presumptive nominee has indicated he wants to end leasing on federal lands.

With U.S. energy demand stifled by Covid-19 restrictions, President Trump said he would continue to work to promote the industry. He pointed to helping broker a deal earlier this year between the Organization of the Petroleum Exporting Countries and ally Russia to reduce output and stabilize prices.

“We were very close to losing a very powerful, great industry,” the president told the crowd. “Now we’re back, and we’re just gonna keep expanding.”

Since March, as the coronavirus has stomped demand, thousands of jobs have been lost across the energy complex mostly in Texas. Capital spending has been drastically reduced, rigs have been dropped and activity is nearly at a standstill.

Although early into the second quarter earnings season, no operators have announced plans to boost their oil and gas activity before 2021. In fact, most energy executives have warned they have little insight into what the short-term future holds as the economy strains against more viral outbreaks.

The president during his speech promoted DOE’s decision Thursday to give more help to the LNG industry. Under the revamped plan, DOE extended to 2050 how long operators may export gas to countries without free trade agreements (FTA). The revised policy, extended from 20 years, also allows existing LNG applicants to amend their pending non-FTA applications to request terms through the next 30 years.

“This policy to utilize export terms through 2050 is the latest of several measures DOE, under President Trump, has taken to support U.S. LNG exports and the benefits they bring both to the United States and to our allies around the world,” said Energy Secretary Dan Brouillette, who accompanied the president to Texas.

“Just this year, LNG exports from the United States will reduce our trade deficit by over $10 billion. Furthermore, LNG exports in the United States are providing tens of thousands of jobs and have led to the investment of billions of dollars in infrastructure. This administration is following through on our commitment to make U.S. LNG, a long-term, reliable, cleaner-burning energy source, available to the world.”

Before global demand was quashed by the Covid-19 pandemic and low prices, U.S. LNG exports were gaining steam as markets expanded in Asia and demand grew in Europe.

The United States continues to be the top global gas producer, and it is in its fourth consecutive year as a net exporter, DOE noted. To date, domestic exports have reached 38 countries across five continents.

“The growth of U.S. LNG exports over the last few years has redefined the global energy landscape, with exports more than quadrupling during the Trump administration,” said Under Secretary of Energy Mark W. Menezes. “These exports are creating thousands of jobs and enormous opportunity here at home, while increasing U.S. LNG competitiveness in the global market.”

During these days of uncertainty, said Assistant Secretary for Fossil Energy Steven Winberg, “this policy will provide further regulatory certainty for U.S. exporters competing for market share around the world. Importing U.S. LNG makes sense from an economic and environmental perspective for countries looking to have reliable, low-emissions energy supplies. With this policy, U.S. exporters will be better positioned to meet long-term global demand.”

One permit granted to TC’s Keystone XL, which supersedes and replaces a 2008 permit. The 30-inch diameter oil pipe is designed to carry up to 435,000 b/d.

The president also granted “approval to vital pipeline and railway infrastructure” along the U.S.-Mexico border.

Another permit extends a 2017 authorization to 10 years from five years for NuStar’s New Burgos pipeline. The 10-inch diameter system is designed to move up to 108,000 b/d of petroleum products into Mexico from Texas. The project also would connect to the Pemex terminal near Reynosa.

Finally, the president granted a permit to Kansas City Southern Railway Co. (KSC) for permission to build and operate an international railway bridge in Laredo on the Texas border. KSC has operations in the United States, Mexico and Panama.