U.S. crude inventories declined for the first time in four weeks as demand for gasoline and other fuels derived from oil bounced back and imports and production slid lower. 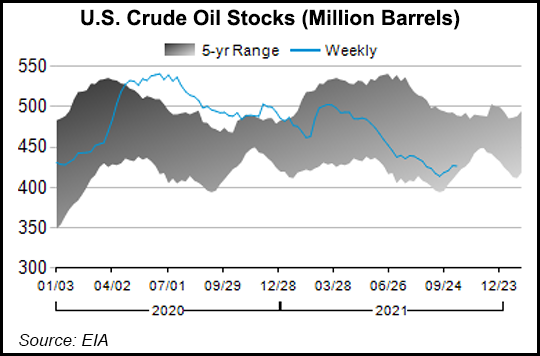 The U.S. Energy Information Administration (EIA) said Wednesday oil inventories for the week ended Oct. 15, excluding those in the Strategic Petroleum Reserve, decreased by 400,000 bbl from the prior week. At 426.5 million bbl, stocks are 6% below the five-year average, EIA reported in its Weekly Petroleum Status Report.

The Oct. 15 period marked the end of a three-week trend during which inventories climbed nearly 13 million bbl. Stocks increased by 6.1 million bbl in the week ended Oct. 8, following a rally in crude prices that drove U.S. benchmark West Texas Intermediate (WTI) crude prices above $80/bbl and to seven-year highs. The price surge translated into higher fuel costs for consumers and businesses that curbed demand.

Notably, demand was up 20% from the comparable week last year, when coronavirus outbreaks tapered travel and consumption, and up 3% from 2019, prior to the pandemic.

Rystad Energy analyst Louise Dickson said oil prices are lofty because of robust global demand as economic activity in countries across the globe mounts following coronavirus vaccination campaigns. Inflation is expected to infuse volatility into oil markets but demand through late 2021 and into early next year, overall, is projected to prove strong, she said.

The trajectory for crude demand, Dickson said, shows the “important role fossil fuels still have in the power mix.”

U.S. production, meanwhile, dipped lower last week and remained well below pre-pandemic levels, EIA said. Output averaged 11.3 million b/d, down by 100,000 b/d from the prior week. It was 1.8 million b/d below the 2020 peak, reached prior to the pandemic in early March of that year.

Though near-term demand is strong, most U.S. producers remain “hesitant to ramp up” output, Dickson said, given the potential for winter virus outbreaks and a larger push to invest in renewable fuels.

That puts the onus on the Organization of the Petroleum Exporting Countries (OPEC) and its Russia-led allies, aka OPEC-plus.

Can OPEC-Plus Balance the Global Market?

Earlier this month, the cartel approved another production increase for November, continuing a plan that is tentatively slated to extend into 2022 to balance supply with rising demand.

Following earlier increases, the cartel in July agreed to raise output by 400,000 b/d monthly. It launched this in August with plans to continue at that pace until it unwinds all of the cuts made amid the pandemic in 2020. The cartel slashed output by 9.7 million b/d last year. Nearly 6 million b/d of that remained offline when Saudi Arabia-led OPEC and its partners met in early October.

OPEC this month said it expected global oil consumption would grow by 5.8 million b/d in 2021 and another 4.2 million b/d next year, reaching an average of about 100 million b/d in 2022. That would put demand on par with 2019 levels, before the pandemic.

In addition to the United States, major countries such as China are hunting for more oil to fuel rising demand for travel fuels as well as to use crude in place of natural gas. OPEC researchers expect more elevated levels of switching from gas to oil in power generation this winter following spikes in natural gas prices this year. Natural gas supplies are precariously light in Europe and could also run low in Asia should the coming winter prove harsh.

Against that backdrop, Raymond James analyst John Freeman said OPEC-plus alone may not be enough to ease supply concerns or upward pressure on oil prices.

“With U.S. suppliers continuing to maintain capital discipline,” he said, “this higher price cycle has a lot more staying power than those before it.”