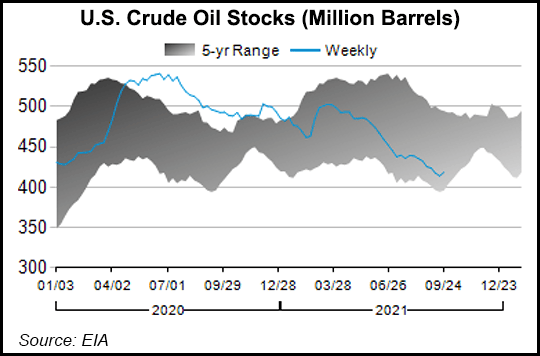 EIA’s Weekly Petroleum Status Report, released Wednesday, showed output climbed to 11.1 million b/d for the week ended Sept. 24. That was up from 10.6 million b/d for the prior week and well above the Sept. 10 week — 10.1 million b/d —  when flooding and power outages caused by Hurricane Ida left widespread production challenges in the Gulf of Mexico (GOM).

Pre-Ida, output had reached 11.5 million b/d. The storm hit the GOM on Aug. 29 and knocked out nearly all production in the region through early September.

On the demand side, motor gasoline consumption climbed last week, continuing a trend that, while occasionally interrupted, spanned most of the summer months. Distillate fuel oil, another source of recent demand strength, dropped 10%, however, driving an overall week/week demand decrease of 4%.

With production up and demand off, U.S. commercial crude inventories, excluding those in the Strategic Petroleum Reserve, increased by 4.6 million bbl from the previous week.

It marked a rare rise in 2021, as stockpiles have declined alongside a broader recovery in demand that, in most weeks, has eclipsed production. At 418.5 million bbl, oil inventories last week were about 7% below the five-year average.

Global natural gas supply challenges could add to the thirst for oil ahead of winter. Gas supplies in Europe are precariously light, and demand is surging in Asia, creating concerns there as well, Rystad Energy analysts noted.

This, the analysts said, “has dramatically widened the economic incentive to switch from natural gas to oil in power generation.” They estimated that Asia alone could boost oil demand by 400,000 b/d over the next two quarters, creating more upward price pressure.

International benchmark Brent crude prices are up about 50% in 2021.

“From a global oil balance perspective,” Rystad analyst Claudio Galimberti said, “this would be a significant shift, and it provides support to the current rally in oil prices.”