Mounting output from the Organization of the Petroleum Exporting Countries (OPEC) and its allies and lofty global natural gas prices are widening the spread between sweet and sour crude prices, the U.S. Energy Information Administration (EIA) said Friday. 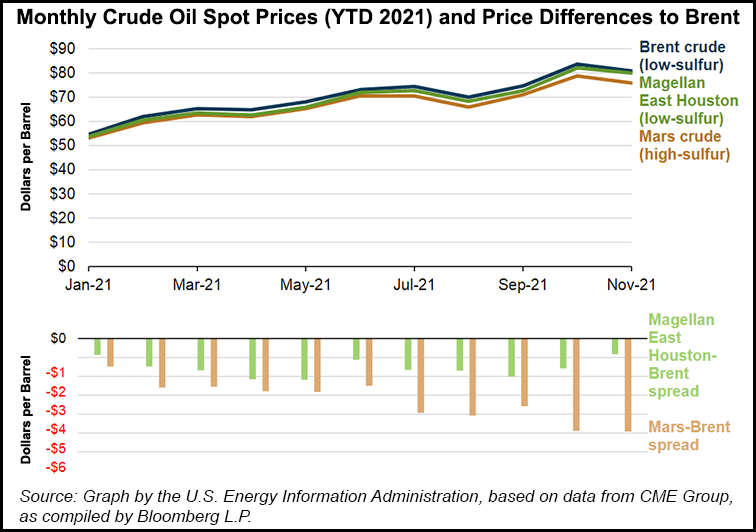 While crude prices have recently come off 2021 highs in large part because of coronavirus resurgence concerns, they remain firmly in positive territory for the year. However, prices of high-sulfur oils have been declining relative to low-sulfur alternatives, EIA said.

The alliance — known as  OPEC-plus — produces mostly medium- or high-sulfur oils, aka sour crude. Its mounting exports contributed to the expanding gulf. Sour oils typically sell at a discount to low-sulfur, or sweet, crude because they must first be treated with hydrogen to meet low-sulfur fuel specifications, EIA said.

In the second half of 2021, sour crude discounts increased compared with historical averages, the agency’s researchers said in a report, with Mars crude, a sour oil, falling in price relative to sweet Brent oil, they said.

The Saudi-led OPEC and partner countries on Thursday agreed to further boost production by 400,000 b/d in January, continuing a pace of monthly supply increases the cartel began in the summer.

The Mars spot price averaged $4.92/bbl less than its Brent counterpart in November, the agency said. This was notably steeper than the $4.09 average difference between the two in August, when OPEC-plus launched its monthly supply increases.

“We expect wide” crude spreads in 2022, Bank of America Corp. analysts said in a note to clients. “Importantly, the shale industry has shown good discipline.”

High natural gas prices have also contributed to the divide between sweet and sour crudes.

EIA researchers noted that hydrogen used to treat sour crude is often produced using steam methane reforming, a process that uses natural gas as an input. “As a result, the recent increases in global natural gas prices have contributed to higher refinery feedstock costs. Higher costs have led to lower demand for sour crude oils that incur more of these costs, at the same time increasing demand for sweeter oils that avoid these extra costs.”

U.S. natural gas prices have come off 2021 highs because of mild weather outlooks for December and light heating demand. But Henry Hub futures are still up about 50% on the year. Prices are also  up notably in Asia and Europe, where supplies are particularly low.

Rystad Energy analyst Kaushal Ramesh said natural gas prices may face headwinds from the new Omicron coronavirus variant, which caused a pullback in energy commodities over the past week.

“But bullish factors are still at play as temperatures drop and the saga of European supply uncertainty continues,” he said.

“In Europe, forecasts pointing to below-normal temperatures and an accelerating withdrawal from the already low storage levels” are supporting prices, Ramesh added. “Assuming a five-year average depletion profile between now and end March 2022, storage levels may start April 2022 at a very low 21% of notional capacity.”