Appalachia-focused natural gas producer Diversified Energy Co. plc on Friday announced its second transaction in as many months to expand into a different gassy region of the United States. 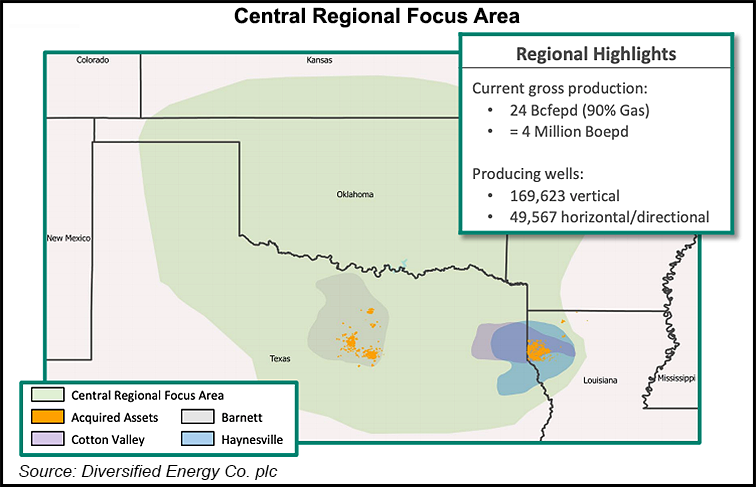 Birmingham, AL-based Diversified said it has entered into a conditional agreement to acquire upstream assets in the Barnett Shale of North Texas from Blackbeard Operating LLC for a gross purchase price of $180 million (estimated $166 million net).

The assets would add about 475 Bcfe of proved developed producing (PDP) reserves to Diversified’s portfolio, the company said.

If the acquisition goes forward, Diversified would be adding net production of about 96 MMcfe/d (82% natural gas).

“The company will complete its ongoing diligence work prior to confirming the final terms (including purchase price) such that it can give no certainty that the Blackbeard acquisition will proceed,” Diversified said. Diversified expects to close the acquisition in June using cash on hand and drawing from its revolving credit facility.

The acquisition “represents an attractive entry point into the Barnett Shale and an extension of the company’s presence in its newly identified Central Regional Focus Area (Central RFA) and demonstrates significant momentum towards building scale in this strategic area,” the company said.

The pending Blackbeard transaction follows the acquisition of upstream assets in the gassy Cotton Valley/Haynesville Shale area from Indigo Minerals LLC in a deal that closed on May 19.

For a gross purchase price of $135 million (estimated net $115 million), Diversified acquired the Indigo assets, which comprise PDP reserves of about 305 Bcfe, with current production of around 95 MMcfe/d and about 780 net operated wells. The Indigo assets are located primarily in northwestern Louisiana.

With the two acquisitions, Diversified’s Central RFA footprint comprises about 300,000 net acres of leasehold generating about 192 MMcfe/d of net production, the company said.

Diversified plans to continue pursuing acquisitions in the Appalachian region as well.

CEO Rusty Hutson Jr. said the Blackbeard transaction in the Barnett “meaningfully expands our footprint in a prolific natural gas producing region and affords us a tremendous opportunity to build significant presence and scale that will begin to drive the same type of operating and cost synergies we enjoy in Appalachia.

“These acquisitions serve as a solid springboard to a large opportunity set of accretive, long-life producing assets which will contribute to strong shareholder returns and drive additional debt reductions.”