Devon Energy Corp. CEO Rick Muncrief said it’s time for his peers to get their act together and stop expanding oil and gas production until demand outpaces supply. 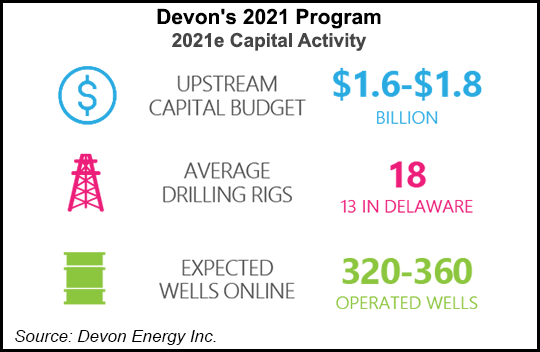 Speaking with investors during a first quarter conference call on Wednesday, Muncrief took the pulpit to preach to fellow exploration and production (E&P) companies. Mirroring comments by Diamondback Energy Inc. CEO Travis Stice, Muncrief said Devon is looking for direction, particularly as the Organization of the Petroleum Exporting Countries and its allies, aka OPEC-plus, has bumped up output.

“Devon has no intention of allocating capital to growth projects until demand-side fundamentals recover, and it becomes evident that OPEC-plus’ spare oil capacity is effectively absorbed by the world markets,” Muncrief said.

“With fundamentals signaling maturing demand dynamics for our industry, we fully recognize the traditional E&P model of prioritizing only production growth is not the correct strategy going forward. To optimize value creation in the next leg of the energy cycle, a company must deploy a financially driven model that prioritizes free cash flow generation over production growth. At Devon, this is exactly what we are doing.”

Devon is planning to limit “top-line production growth from 0-5%,” Muncrief said. “We’re pursuing margin expansion in earnings through scale and a leaner corporate cost structure, where moderating reinvestment rates…are substantially below that of cash flow. We’re maintaining low levels of leverage to establish a greater margin of safety.”

Said the CEO, “I personally feel it is time for industry to stop contemplating and talking about the possibilities of a cash-return model and more quickly embrace this necessary change. High returns on capital employed, reduced reinvestment rates and free cash flow generation will determine the winners in this cycle, not the historic behavior of delivering outsize production growth.”

The Oklahoma City-based independent is one of the largest producers in the Lower 48, with a leasehold that extends across the Anadarko, Permian, Powder River and Williston basins, and into the Eagle Ford Shale.

What the producer is focused on, though, are efficiencies and cash flow. It’s also securing a backlog of drilling permit approvals for federal lands, particularly in the New Mexico portion of the Permian, where Devon works the Delaware sub-basin.

The U.S. Department of Interior’s directive lapsed in March to temporarily suspend permitting on federal lands and in the offshore, clearing the way for permit approvals.

To date, Devon has secured “more than 50 approvals” to develop leases in southeastern New Mexico.

In aggregate, Devon today has about 500 federal drilling permits for the Delaware, which represent an estimated inventory of four years at the current drilling pace. Only 35% of Devon’s 400,000 net acres in the Delaware is on federal lands, it noted.

Overall, growth was driven by the Permian Delaware, which accounted for 62% of oil output. Devon took some knocks to output totals from the severe winter weather during February, which cut production by about 8%.

Still, upstream capital spending came in 5% below guidance at $447 million as efficiencies continued to improve. On average, Devon was running 18 rigs and six completion crews in the quarter, with 80% of capital allocated to the Delaware. Field-level cash margin improved to $28.95/boe, an 88% increase year/year, while corporate costs fell 30%.

Devon highlighted the Danger Noodle project in Lea County, NM, which achieved average 30-day production rates of 5,100 boe/d per well. Returns “were enhanced by completed well costs that were more than 20% below pre-drill expectations,” management noted.

In Oklahoma’s Anadarko, production averaged 68,000 boe/d, headlined by the start of a two-rig project with Dow Inc. The joint venture spud eight wells during the quarter and is on course to drill up to 30 wells this year.

Williston production averaged 61,000 boe/d, 72% weighted to oil. To stabilize production, the company plans to bring online 15-20 wells over the remainder of the year.

Production in the Eagle Ford averaged 30,000 boe/d on a two-rig program and completion crew. “Operational continuity” has been reestablished, Devon noted. It now plans to bring online around 40 wells this year.

Meanwhile, Powder River output averaged 23,000 boe/d, 74% weighted to oil. Oil production increased by 6% sequentially as 10 wells were turned to sales in the Parkman and Turner formations. Capital activity is to be “limited for the remainder of 2021,” with tests planned on the emerging Niobrara oil resources across the 300,000 net acre leasehold.