Diamondback Energy Inc. CEO Travis Stice said until there’s a “clear signal” to increase oil output, there are no plans to expand volumes this year in the Permian Basin. 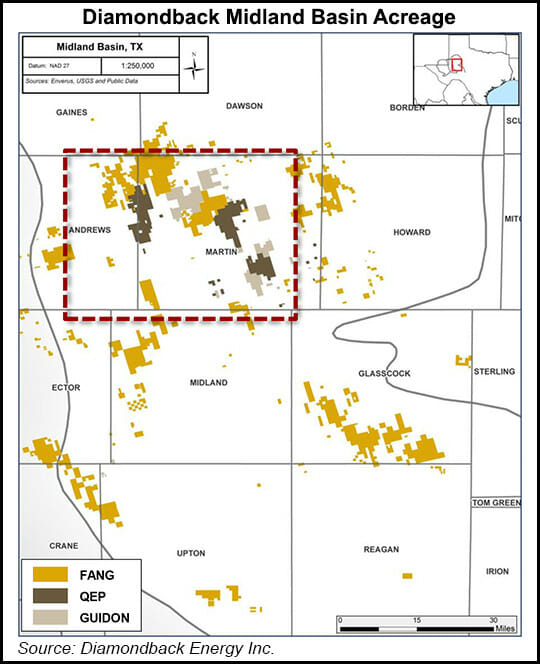 Stice and his management team discussed first quarter performance and the outlook for the oil and gas market during a conference call. The CEO pointed to the bump in global oil output underway by the Organization of the Petroleum Exporting Countries and its allies, better known as OPEC-plus. That’s reason enough to remain cautious, he said.

“Even though oil demand has shown signs of recovery from the depths of the global pandemic, oil supply is still purposely being withheld from the market primarily through the actions of OPEC-plus,” Stice said. “As a result, we continue to believe we do not need production growth and we’ll hold our pro forma fourth quarter 2020 oil production flat through 2021.”

Regarding the decision to hold the line on oil output, Stice said he wished “most of the decisions that I had to answer were binary yes or no type questions. And this is not one of those.

“Just from a macro perspective, you know that OPEC-plus is effectively controlling the market right now… An outcome of reduced inventories and against the backdrop of a still fledgling oil demand recovery, which quite honestly, might be negatively impacted by the unfortunate outbreak in India, it’s just still in our opinion too early to be talking about growth. There is no clear signal now.

“Do we need to get to zero with OPEC-plus oil being withheld? I don’t know that that’s the right answer either. We’ve still got a similarly 1 million b/d or 1.5 million b/d of our production likely coming back on. So it’s an evolving question. But as it pertains to Diamondback, there is no clear signal for us to grow volumes and it’s unlikely you’ll see those signals this year.”

Diamondback last month updated 2021 production guidance after completing the takeover of Guidon Operating LLC and QEP Resources Inc. The acquisitions, which added an aggregate of 80,000-plus net acres to the Permian base, included leases outside the basin that are unlikely to be developed.

To that end, Diamondback made deals that should fetch around $832 million by selling off QEP’s Williston Basin acreage and a slice of holdings in the Permian.

A centerpiece of the program, to reduce carbon dioxide (CO2) emissions, is solid in the legacy Permian operations. However, there’s work to do with the newly acquired leaseholds, Stice told analysts.

“We flared 0.75% of our gross gas production in the first quarter, a decrease of over 85% from 2019. Flaring is the biggest driver of our CO2 emissions. And while we are happy with our progress on our legacy acreage, we still have significant work to do on our recently acquired positions as we move to reduce our Scope 1 GHG intensity by at least 50% from 2019 levels by 2024. We’ve also committed to reducing our methane intensity by 70% over the same time frame.”

Scope 1 includes direct emissions from sources owned or controlled by a company, while Scope 2 are indirect from energy that is purchased. Scope 3 are all other emissions associated with activities, including those by customers.

Diamondback also has ongoing work to reduce its direct CO2, or Scope 1 emissions, from its Permian operations. To that end, it directed capital in the first quarter “to retrofit our older tank batteries with pneumatic devices, as gas pneumatics account for 50% of our methane emissions,” Stice said.

“We also signed a contract to conduct quarterly flyovers of all of our tank batteries to more frequently check for equipment leaks improving or our maintenance practices.”

The company’s Net Zero Now initiative was launched this year too, “which means every hydrocarbon molecule produced by Diamondback is anticipated to have zero-net Scope 1 carbon emissions from Jan. 1, 2021, forward,” he said.

“While we recognize we still have a carbon footprint, we have already purchased carbon credits to offset remaining emissions and ultimately plan to be a fast follower in investing and income-generating projects here in the United States that will more directly offset these remaining Scope 1 emissions.”

Diamondback is working in tandem with related entity Rattler Midstream LP, which owns and develops infrastructure in the Permian. The companies have some “long-haul pipe” projects on the drawing board that could include carbon capture utilization and sequestration (CCUS).

“We don’t expect to become subject matter experts in income-generating…CCUS-type projects, but we do anticipate aligning ourselves with those that are experts and try to do this technology,” Stice said. “There’s new technology emerging, and we’re trying to stay abreast of it,” as are Diamondback’s peers. “You need to lean into this soonest. But I think it’s an industry trend for sure.”

CFO Mark Smith told analysts that as Diamondback’s Scope 1 emissions decline, “you have less incentive or need to invest on the other side to offset it, right? So today, $50 million a year is going into the tank battery side. I think we’ve put out some new numbers that we’re going to replace 200 generators in the field this year and move that to line power.

“We’re then moving toward a Scope 2 emissions number and how we’re going to get that down through sourcing electricity through renewable sources. So as Travis says, we’re going to be a fast follower on the investment side. We’re certainly going to be a leader in terms of spending dollars in the field to clean up and reduce our intensity on what we can control.”