Natural gas isn’t going anywhere soon and overall demand for U.S. gas will keep growing on the back of rising exports, according to Mercuria Energy Co.’s Charles Blanchard. 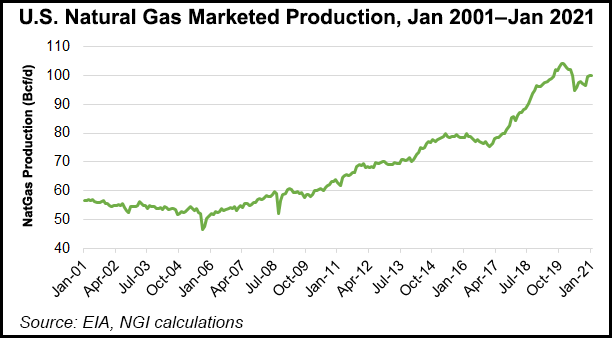 Blanchard, head of North American natural gas research, recently published an exhaustive study on the history of natural gas in the United States called, “The Extraction State.” He spoke to NGI about the book, published by the University of Pittsburgh Press, in the latest episode of NGI’s Hub & Flow podcast.

Blanchard suggested that demand for natural gas in the United States, which has grown since 1985, has probably reached its peak. New wind and solar power generation coming online outweighs retirements of coal and nuclear plants, which will squeeze natural gas market share.

That lack of demand could be made up for in the export market, however. “We are setting records every day,” in liquefied natural gas exports, Blanchard said. He also expects exports to Mexico to hit 6.5 Bcf/d this upcoming summer, a record. “So the market size will still net grow.”

Because of the globalization of the gas trade, in a macro sense, “we should start to see a convergence of global markets,” Blanchard said, where Henry Hub trades closer to global benchmarks like the Japan-Korea Marker and Title Transfer Facility points.

Some things in the natural gas market won’t change, though. Prices, he said, would still depend mainly on the state of temperatures. “Ultimately, they’re a derivative of the weather.”

From Nuisance To Key Fuel

Blanchard wrote his book as a response to IHS Markit Vice Chairman’s Daniel Yergin’s award-winning energy tome “The Prize,” which focused mainly on the oil industry. Blanchard said earlier in his career, when he was looking for a similar book to “The Prize” on U.S. natural gas, he found that it didn’t exist. So he wrote it into being.

The history of natural gas in the United States is one of booms and busts, regulatory upheaval and often painstakingly slow progress.

The first major natural gas find in the United States took place in 1878, in the industrial city of Pittsburgh. The problem that struck the prospectors then was one that to this day remains prescient: Natural gas is difficult to control and to store. Without a pipeline and a market, it’s worthless.

For the next 65 years after that Pittsburgh find, the fuel was seen basically as a nuisance byproduct to the more valuable oil, and often wastefully flared off. At the same time, over the decades, the use of natural gas in electricity, homes and industry started to slowly increase. Long-haul natural gas pipelines were built in the 1920s and 1930s.

Because of the nature of its infrastructure and operating characteristics, natural gas, like the electricity business, tended to foster monopolistic enterprises. Monopolies aren’t necessarily bad, “but they do need regulation,” Blanchard said. In 1938, the first major piece of regulation was created with the Natural Gas Act.

By 1954, every single state in the United States except Florida had access to natural gas. This is in contrast to modern Mexico, where many of the country’s poorest states like Chiapas, Guerrero and Oaxaca to this day lack access to the fuel.

The demand for natural gas started to steadily grow. Suddenly, in the late 1960s and early 1970s, there wasn’t natural gas to meet U.S. demand, and “it became a crisis.” This was the precursor to natural gas becoming a commodity, and to the creation of the modern gas market in the United States as it is known today.

Up until the early 1980s, natural gas had been a vertically integrated industry. To create a liberalized model for the market, “you had to essentially break this up,” Blanchard said.

This created a slew of other problems. Traders were now able to move gas on a pipeline. But “who do we buy from, and who do we sell to?” were common questions. New relationships had to be established, Blanchard said. “But what do I do? Do I knock on a door?”

Liquidity needed to be built up at hubs, contracts standardized and “agreed-upon things” needed to be established, like the length of the gas day and where pricing points would materialize. “This developed slowly over time, and it took years to do.”

The last 20 years of the gas market in the United States has seen another dramatic shift related to the “shale revolution” and hydraulic fracturing (fracking) technology.

Natural gas production has boomed, making the United States the global leader it is today. Take the case of the Appalachian Basin, where prior to the use of fracking, production was less than 1 Bcf/d. Today, this figure is around 34 Bcf/d and pipelines that once sent gas from the southern United States north now flow the other way.

The dynamics “have totally shifted,” Blanchard said, “but the way we do business hasn’t changed at all.” A trading screen looks “starkly similar” to how it did in 2000, he said.