With robust demand from both Europe and Asia for U.S. supplies of liquefied natural gas (LNG) and strong levels of pipeline deliveries to Mexico, the Energy Information Administration (EIA) forecasted that U.S. gas exports would exceed imports by an average of 11.0 Bcf/d in 2021. That would mark a nearly 50% jump from the 2020 average of 7.5 Bcf/d. 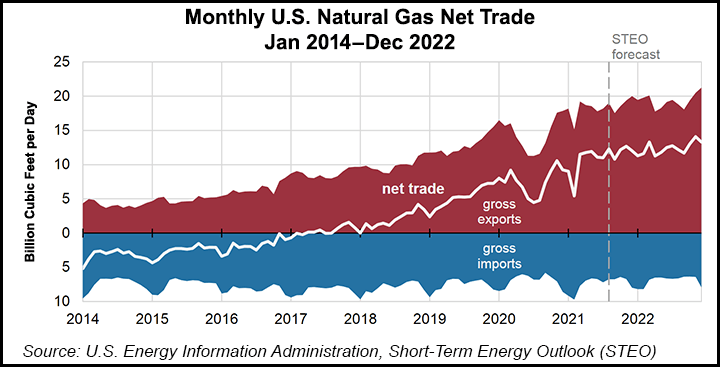 EIA also said in its August 2021 Short-Term Energy Outlook (STEO) that, for the first time since LNG exports from the Lower 48 began in 2016, annual send-outs of the super-chilled fuel this year are expected to outstrip pipeline exports — by 0.6 Bcf/d.

“We forecast total U.S. natural gas exports to continue to grow throughout 2021 and 2022, exceeding the record of 14.4 Bcf/d set in 2020,” EIA researchers said in a note Monday following up on the latest STEO.

Demand from Asia and Europe, where storage levels are depleted, is steady and expected to continue driving demand through the coming winter. Additionally, pipeline exports to Mexico, already strong in the spring, accelerated this summer amid intense heat and elevated cooling demand.

EBW Analytics Group estimated that year/year net exports ran 4.0 Bcf/d higher in April and May and then accelerated to 6.3 Bcf/d in June and topped 8.0 Bcf/d in July. This helped to drive natural gas futures above $4.00 last month and to highs last seen in 2018.

Though natural gas prices have eased in August as weather forecasts indicate the Lower 48 has passed peak summer heat, the EBW team noted that demand from Europe in particular shows no signs of easing.

Domestic demand has proven high this summer as well, driving up prices over the course of June and July when scorching heat waves permeated large swaths of the country. This galvanized higher import levels, but not enough to match the demand for U.S. exports, EIA said.

“We expect U.S. imports of natural gas by pipeline and as LNG, combined, to increase by 6% compared with 2020, averaging 7.4 Bcf/d in 2021, before declining to 6.9 Bcf/d in 2022,” researchers said, noting that nearly all imports enter the United States from Canada to meet needs in Midwestern and Western markets.

U.S. pipeline imports previously had dropped annually since 2008. However, EIA said, “we expect pipeline imports of natural gas to increase in 2021 because of relatively flat U.S. dry natural gas production” in addition to higher consumption.In the latest STEO, EIA estimated Henry Hub spot prices would average $3.42/MMBtu for all of 2021, up from $3.21 predicted a month earlier. The agency raised its expectations after prices soared to an average $3.84 in July, a nearly 60-cent month/month increase from the June average of $3.26.