Bitter cold forecast for parts of Europe this week is set to bring the first major test of the winter heating season for the continent’s gas market and its robust storage inventories. 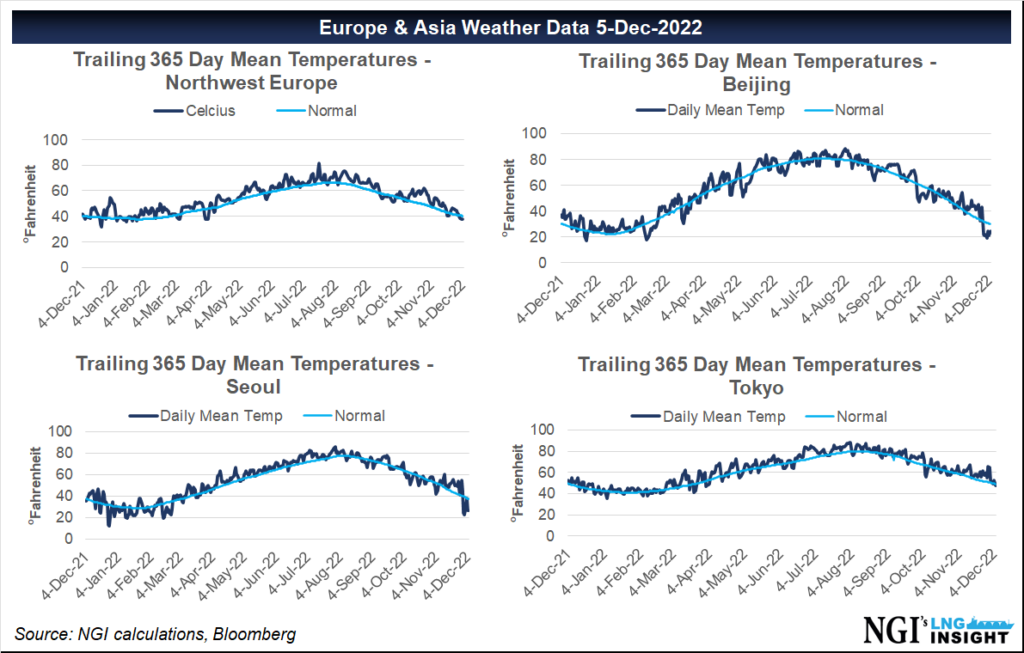 The UK’s National Balancing Point and the Dutch Title Transfer Facility (TTF) both gained about 3% on Tuesday and settled above $40/MMBtu. The market is focused intently on weather as the continent readies for its first winter without substantial imports of Russian natural gas.

Temperatures are expected to plunge below zero in the coming days on parts of the continent. Maxar’s Weather Desk expects intense cold later in the week to impact the UK and Western Scandinavia. While the southern part of the continent is expected to remain warm, frosty weather is also forecast to persist in the north into next week.

“Given the current prospect of a prolonged cold snap in December, Kpler Insight expects Dutch TTF prices to remain elevated in the coming weeks, and prices could certainly rise further if unexpected supply disruptions hit the market or Asian demand for LNG returns, which would draw cargoes away from Europe,” Kpler analyst Laura Page told NGI.

Colder weather finally settled in across Europe at the end of last month after an unseasonably warm start to the heating season. Prices climbed above $40 last week as forecasts shifted even colder.

Over the last week, underground storage inventories have declined slightly from about 94% of capacity to 91%. Floating storage inventories at sea have also been drawn down, pushing freight prices lower as more vessels are freed up. Spot freight rates in the Atlantic Basin have tumbled from nearly $500,000/day last month to $228,500 on Tuesday, according to Spark Commodities.

While power prices have spiked in Europe as nuclear availability has been limited and wind power generation has remained weak, natural gas prices have increased only moderately.

Rystad Energy analyst Fabian Rønningen said in a note to clients Tuesday that LNG imports have remained strong and gas consumption on the continent has declined by as much as 25% year/year due to elevated prices.

Indeed, Germany is poised to receive its first ever liquefied natural gas import cargo next week. The Hoegh Esperanza left the Sagunto LNG terminal in Spain on Thursday, where it loaded a cargo, and is scheduled to arrive at Wilhelmshaven Dec. 10, according to ship-tracking data from Kpler. The vessel will then stay there as a floating storage and regasification unit at Uniper SE’s offshore import terminal.

According to Tudor, Pickering, Holt & Co., global LNG trade hit 34 million tons (Mt) in November, up from 31.4 Mt at the same time last year. Asian imports were up 1.1 Mt month/month as China and Japan moved to secure supplies for the winter.

Meanwhile, European imports jumped 10% month/month to 10.6 Mt in November and were near records set earlier this year, TPH said. Kpler data showed that European LNG imports were 12.04 Mt in November, a record-high for the year.

Fearing ongoing competition as Europe will continue to displace Russian supplies in the coming years, Japan is reportedly considering setting up an LNG reserve. According to news media reports, the government is aiming to import a minimum of one cargo each month during the winter beginning in 2023. The cargoes could be directed to locations with the greatest needs in the event of a supply emergency.

While prices rose overseas, Henry Hub continued to plummet in the United States, where the contract was traded well below $6 into 2024 on Tuesday.

U.S. gas prices have tumbled from highs of nearly $8 last month as December heating demand is expected to be lackluster amid weakening forecasts that show warmer weather trends. Natural gas production also continues to average above 100 Bcf/d, while demand has hovered around 98 Bcf/d. That has eased the pace of storage withdrawals and kept pressure on prices.

Both BofA Global Research and TPH said last week that they expect higher production and stronger storage inventories to keep prices below $5 heading into next year.

U.S. LNG exports have been resurgent, though, with feed gas deliveries to U.S. terminals surpassing 12 Bcf in recent weeks and reaching levels not seen since before the Freeport LNG export terminal was knocked offline in June.

While Freeport LNG again pushed back its restart date last week to late December, flows to the Sabine Pass terminal in Louisiana have rebounded and deliveries to the Calcasieu Pass plant in Louisiana have continued to ramp-up and fill the void left by the Freeport outage.

In the oil markets, Brent crude dipped below $80/bbl in Tuesday trading. The weakening global economy continues to put downward pressure on crude benchmarks, despite a cap on Russian oil prices that went into effect on Monday along with a European Union embargo on the purchase of Russian crude.

OPEC and its allies also decided over the weekend to maintain output cuts through year-end 2023 and not slash production further.

LNG prices linked to Brent crude remain well below spot prices. They were at $14.22/MMBtu on Monday, assuming a maximum 17.2% slope, according to NGI calculations.