Europe is expected to have enough natural gas to get through the winter, but a set of variables leaves the continent facing “unprecedented risks” that could have even deeper repercussions next year and beyond. 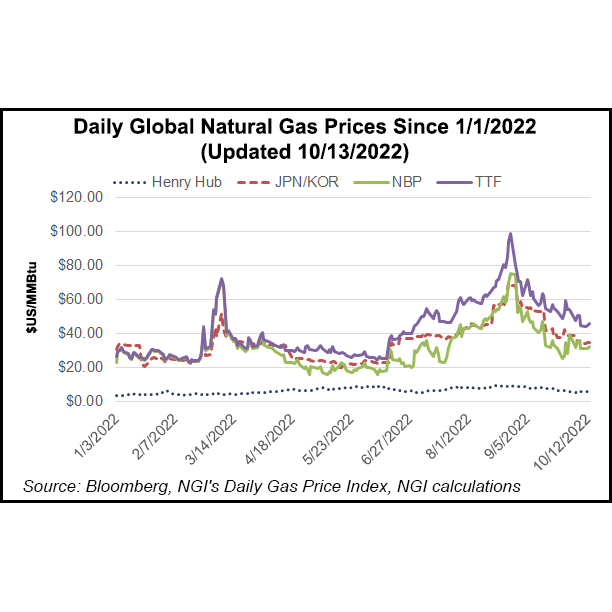 Natural gas storage inventories on the continent are nearly full. Preserving those stockpiles, particularly during the depths of winter, depends on a variety of factors. Chief among them is how much Eurpeans can cut back on demand; how cold the season turns out to be; how much LNG Asia will need to meet its own needs, and how long Russia will deliver supplies to the continent.

Those factors could “cause extreme volatility and a requirement for heavy-handed government intervention to reduce demand,” UK consultancy Timera Energy said in an analysis earlier this month.

What happens in Europe this winter is also likely to shape the global natural gas market well into next year.

Tom Marzec-Manser, head of gas analytics at ICIS, said the company’s research suggests that if all Russian pipeline supply to the European Union (EU) is halted, member states could still get through the winter. To do so, he said the bloc would have to come close to meeting a voluntary gas demand reduction target of 15%. The weather would also have to be normal.

“The concern in the market now is how does Europe source enough pipeline gas and liquefied natural gas through next summer so storages are again very full ahead of winter 2023-24,” he told NGI. “Without Russian gas, which was still flowing in some reasonable capacity until June of this year, this will be a difficult ask.”

Through the first nine months of the year, Russian gas exports to Europe declined by 44%, compared to the same period in 2021. They began falling off sharply over the summer as tensions with the West over Russia’s war in Ukraine intensified and Gazprom PJSC blamed maintenance issues for declining deliveries.

Russian gas supplies are still trickling into Europe through Ukraine and Turkey. “A total cutoff in Russian flows to Europe cannot be ruled out,” the International Energy Agency (IEA) said in its latest quarterly gas report. The agency said the shift in Russian flows has created “unprecedented risks” for Europe’s supply security.

Weather is likely to be the single biggest factor for the gas market this winter in both Europe and Asia. Timera noted that colder temperatures could account for a 706 Bcf increase in European gas demand.

“It’s the depth of the heating season that will be the determining factor as to whether we can get through the winter season without interruption,” Neil Atkinson, an independent energy analyst based in Paris, told NGI.

Maintaining storage inventories at adequate levels for the second half of the heating season will be a crucial factor to responding to late cold snaps and ensuring supply security heading into 2023, IEA said.

An IEA analysis found that cutting gas demand in Europe by 9% versus the five-year average would be necessary to maintain the continent’s storage levels above 25%, particularly if LNG inflows are reduced.

Europe is expected to continue attracting additional LNG supply this winter, where price premiums above those in Asia are expected to hold. The continent is also on track to boost its import capacity by about 247 Bcf given the floating storage and regasification units that are scheduled to come online in the coming months.

Much will depend on the Asian natural gas market. Felix Booth, head of LNG at Vortexa, told NGI that Asian markets are calm heading into winter. He said buyers in the region have mostly been utilizing long-term contracts to maintain storage levels.

In China, which surpassed Japan last year as the world’s top LNG importer, an uptick in Russian LNG imports and pipeline gas, along with other fuels such as coal, are currently expected to meet additional winter demand. Booth said issues at the Malaysia LNG facility that have limited cargo deliveries are expected to impact Japan more.

Still, China could import more of the super-chilled fuel this season if colder weather creates shortages. Chinese buyers are reportedly in discussions to procure more spot cargoes ahead of the season after sitting on the sidelines most of the year.

China Petroleum and Chemical Corp., aka Sinopec, co-authored a report with BSC Energy Consulting this month that said a gas supply deficit could emerge early in the winter if temperatures are colder and policies to curb the spread of Covid-19 are eased.

The China Meteorological Administration also said this month that a La Nina Weather pattern is forecast through the winter, which could bring frigid temperatures. Moreover, Japan’s government said this month that it would step in to buy LNG cargoes if private companies can’t secure them in the event competition heats up.

“The biggest risks to northeast Asian LNG demand are acute and prolonged cold weather spells and an economic recovery in China – two factors that have the potential to boost LNG import requirements and draw LNG supplies away from Europe,” Kpler analyst Laura Page told NGI.

Despite this winter’s wildcards, there’s a growing consensus that a multi-year energy crisis is emerging. This season could only be a preview.

Europe partly owes its healthy storage inventories to stronger Russian supply volumes through the first half of the year. Timera said in its analysis that the EU will likely need to make up an additional 1.4 Tcf of gas supplies next year to cover what’s been lost from Russia.

The United States has provided a major fallback for Europe. Through the first nine months of the year, U.S. cargoes have accounted for 43% of all European LNG imports, according to Kpler data. LNG has nearly replaced Russian pipeline supplies in Europe’s energy mix, Page said.

Atkinson stressed, however, that the U.S. can’t send much more LNG to Europe than it already is. There are no significant supply additions scheduled to come online along the Gulf Coast for another two years.

In its latest winter outlook, the Natural Gas Supply Association (NGSA) said U.S. LNG producers would operate at maximum capacity. American exports are forecast to average 13.4 Bcf/d this winter, compared to 12.2 Bcf/d last year, according to the NGSA.

Volumes should be strengthened by the scheduled return to service of Freeport LNG in November following a prolonged outage that started in June after an explosion knocked the plant offline.

If Europe expects to continue attracting LNG next year, buyers in Europe will have to continue paying steep prices. As Asia gradually returns to the market, analysts at Morgan Stanley said in a recent note to clients that LNG prices in Northwest Europe would have to go above $40/MMBtu next year from around $20 this fall.

Those dynamics are likely to keep the pressure on governments in Europe, which have been grappling with effective ways to respond to the worst of the energy crisis.

“I think policymakers are planning on a multi-year energy market in Europe without any Russian supply,” Atkinson said.

“I think it’s a wholesale shift, whether you agree with it or not,” he added. “The EU has taken a very strong stance against Russian aggression. We’re going to find out in 2023 that the consequences of taking that stand by applying sanctions are very, very difficult.”