Constitution Pipeline Co. has finalized the route it will propose for a Marcellus Pipeline in a certification application it expects to file with FERC this spring, the company said in a project update newsletter sent to landowners and other stakeholders. 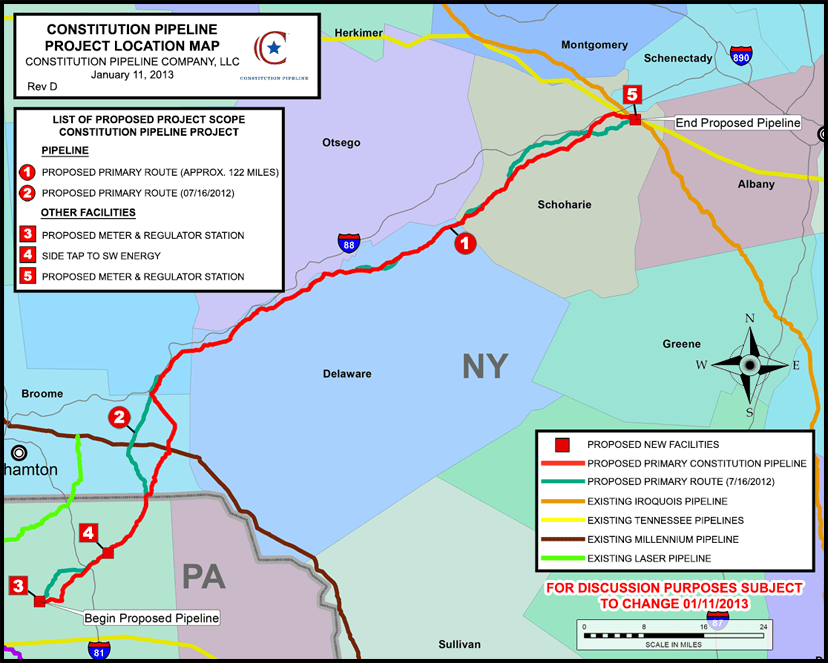 “We’re confident that the revised primary route is the best possible path to minimize environmental and landowner impacts, balancing those considerations with the engineering requirements for safely and properly constructing and operating a transmission pipeline,” Matt Swift, project manager, said in the newsletter.

The revised primary route, which was finalized after months of environmental and engineering analysis, including reviews of 20 route alternatives, includes changes to more than half of the original pipeline alignment, “most a direct result of stakeholder input,” Constitution said. The revised route features less overall land impacts, including about 87 fewer acres of total forest impacts during construction; about 20 fewer miles of side slope construction; 22 fewer water body crossings; and significantly fewer residences within close proximity of the proposed pipeline.

In addition, Constitutions said it has reached an agreement with Iroquois Gas Transmission to expand its existing Wright compressor station, which would eliminate the need for Constitution to build a new 32,0000-hp compressor facility in Schoharie County, NY, as originally proposed.

“Most of the route modifications were made to address environmental issues, constructability and to accommodate landowner requests,” the company said. “The modifications ranged in distance from a few hundred feet, up to three miles.”

Constitution expects to file drafts of resource reports, including detailed maps of the proposed route, with the Federal Energy Regulatory Commission (FERC) late next month, and to file its certificate application with FERC this spring. Construction of Constitution is expected to begin in April 2014 and it is scheduled to be in service by March 2015.

Last February Williams Partners and Cabot announced the project to carry Marcellus gas from northern Pennsylvania to northeastern markets (see Shale Daily, Feb. 22, 2012). The 120-mile-long, 30-inch diameter pipeline would connect Williams Partners’ gathering system in Susquehanna County, PA, to the Iroquois Gas Transmission and Tennessee Gas Pipeline systems in Schoharie County, NY. Williams Partners would own 75% of the system and through its affiliates would provide construction, operation and maintenance services. Cabot, which committed to anchor shipments, would own the remaining stake.

Piedmont Natural Gas, a distribution company that serves more than 1 million customers in North and South Carolina and Tennessee, is investing $180 million in Constitution Pipeline Co. LLC as an equity holder in the project (see Shale Daily, Nov. 14, 2012). The distribution company will not be a customer of Constitution. Williams Partners will maintain a 51% stake in the pipeline, while Cabot will have a 25% share.

Constitution has said it will work with Leatherstocking Gas Co. LLC, a New York-based natural gas supplier, to pursue agreements to design, build and operate delivery interconnects along the natural gas pipeline’s proposed route, essentially converting it to an “open access pipeline” (see Shale Daily, Nov. 7, 2012). Both companies said they envision local municipalities and public utilities would be able to tap into the pipeline to provide natural gas to residential, commercial and industrial customers.