Consol Energy Inc. and Noble Energy Inc. have ended their joint venture (JV) in the Marcellus Shale, giving both companies a clearer path forward with regard to how those assets are developed, in a deal indicative of how rapidly the industry has changed since the partnership was formed in 2011. 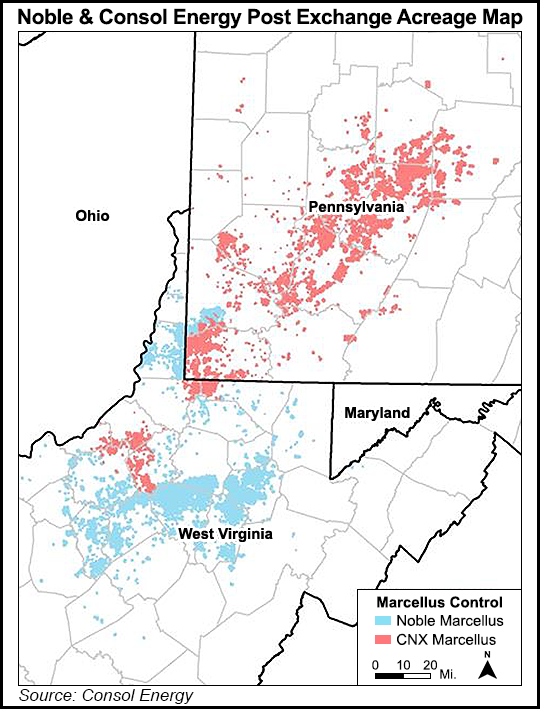 The companies announced an exchange agreement to divide the 669,000 acres in Pennsylvania and West Virginia and the 1.07 Bcfe/d of production tied to the properties. The deal favors Consol, an Appalachian pure-play that for years has been rebuilding the core of its business to evolve around natural gas production rather than coal. The new production would bulk up its earnings and give the company more assets to sell in the future, if necessary.

A smaller company with more debt, the exchange will help Consol better delever its balance sheet and the pace of development in its core area, management said. Noble is a larger diversified company that has been more focused on the Permian Basin’s Delaware sub-basin, Colorado’s Denver-Julesburg Basin and the Eagle Ford Shale in Texas (see Shale Daily, Aug. 3). Noble CEO David Stover said the separation would give the company more control over the pace of its Marcellus development at a time when it has been more focused in other parts of the country.

The JV had originally provided Noble with entry into the Appalachian Basin and a way forward for Consol as it accelerated its development there (see Shale Daily, Aug. 29, 2011).

“From a strategic standpoint, the exchange transaction is a watershed moment in Consol’s evolution into a pure-play exploration and production company,” CEO Nicholas Deluliis said during a conference call Monday. “With this morning’s announcement, the transformation chapter of Consol’s story is now closed. As we close the transformation chapter, we now open the execution chapter and turn the page from a defensive posture to an offensive posture.”

The company will receive a $205 million cash payment from Noble. It has already increased its 2016 exit rate to 390-395 Bcf from its previous guidance of 380-385 Bcf. Both companies would remain co-sponsors and retain their 50% interest in Cone Midstream Partners LP’s general partner, which was formed to gather the JV’s production and taken public in 2014 (see Shale Daily, Sept. 25, 2014).

The companies said they’ve worked to reallocate firm transportation (FT) and processing to align their respective upstream assets after the exchange.

“Those changes need approvals and consents, and we’re working on that with the necessary parties, but at the end of the day we’ve been able to move FT around so we have the capacity to handle our growth over the next two to three years,” Consol COO Timothy Dugan said.

He added that the company is still examining how it will work the new DUCs into its 2017 program and whether it would add rigs on the acreage next year. The deal also enhances Consol’s stacked pay opportunities. It retains dry Utica shale rights under all of the Marcellus acreage going to Noble. The majority of the DUCs it’s taking and much of the flowing production included in the deal for Consol are also located in West Virginia.