ConocoPhillips leaseholds in the Eagle Ford and Bakken shales, along with the Permian Basin, together boosted their year/year output by 42% in the first quarter, management said Thursday. 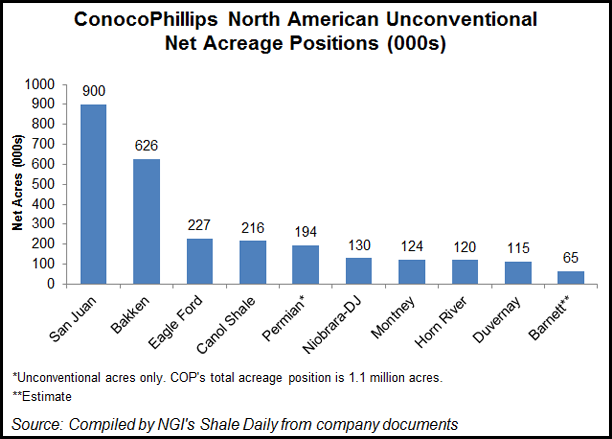 Across its holdings in North America, the Houston-based independent reported that production was 5% higher than in 1Q2012 at 475,000 boe/d, up 24,000 boe/d from the year-ago period. The Eagle Ford, Bakken and Permian assets delivered a total of 182,000 boe/d. Canadian production also increased by 17,000 boe/d to 283,000 boe/d. Total liquids production in the United States and Canada jumped 17%, while natural gas output fell by 4%.

That’s only the beginning of what is expected to be big gains through 2017 in the Lower 48 states and across North America, with $25 billion earmarked for investment in the next four years, said CFO Jeff Sheets. He and exploration and production chief Matt Fox discussed the latest results and upcoming plans during an earnings conference call.

Most of the North America capital expenditures this year will target liquids-rich development, said Fox. Long leveraged to natural gas-focused operations, ConocoPhillips over the past year shifted its targets to liquids and oil, and liquids now are 51% of the production mix, up from 45% a year ago.

“There is a lot potential to invest” in U.S. natural gas prospects, said Fox, “but we are really focused on liquids-rich assets, and we also get associated gas with that. I don’t see us redirecting more to gas until [$4.00-plus prices] are significantly north on a sustained basis.”

“Right now, in the Eagle Ford, we’re in a pretty linear growth trend. And we will see that continuing essentially as we go through the year.”

The drilling phase for the Eagle Ford is expected to be done by the end of June “and then be fully held by production by the end of the year,” said Fox. “And as we approach this milestone, we’re focused on planning for full-field development.”

The gains in the onshore output have led management to consider ways to “implement infrastructure and marketing solutions to improve our margins,” said Fox. “For example, we continue to install stabilizers in the Eagle Ford to allow us to more effectively ship our light crude production.”

In the Permian, where the operator holds 1.1 million net acres, activity is on the increase in both unconventional and conventional plays.

“We’re currently testing several unconventional plays in both the Delaware and Midland basins,” said Fox. “For example, we’re seeing good results from early tests of Avalon wells in the Delaware Basin where about 60% of the production stream is liquids…In the Permian conventional development program, we now have our four-operated rigs running,” and the current plan is to bring on about 135 wells this year, which would be nearly 50% more than in 2012.

“The production is happening pretty much as we expected from all three plays, the Eagle Ford, the Bakken and the Permian,” said Sheets. The Eagle Ford leasehold to date is 60% oil-weighted, 20% natural gas liquids (NGL) and 20% natural gas, “so that’s really strong cash margins. And Bakken, of course, is mostly oil…The Permian is a very favorable mix as well.

“So cash margins from all these assets are really much higher than the average of our current portfolio.” Sheets said visibility in the company’s Lower 48 cash margins finally have become evident “as that portfolio has moved now toward…about half liquids, to where it was only 45% a year ago…You’re starting to see that all across the portfolio. Cash margins have been a little bit hurt in Canada because of the recent weakness in bitumen prices, but we see that that’s going to start recovering as well…

ConocoPhillips’ “goal,” said Fox, “is to have as much optionality as we can because…there’s a lot of volatility and various markers in the production itself in all three of those basins. For example, in the Eagle Ford, the way that we’re set up for our sales, we’re realizing West Texas Intermediate [WTI] WTI plus about $5.00 from Eagle Ford, and that’s a mixture of production that’s going by pipeline. A lot of production is still going by truck…

“Our liquids, the non-NGL liquids, are sold as a light sweet crude and because they’ve got very high-value metal distillate, that makes them good refinery products, so they’re not going being sold as condensate. And so we’re — and we feel good about the liquid and the gas takeaway capacity just now in the Eagle Ford.

“In the Bakken, we’re actually realizing WTI minus about $5.00 on average…We’ve got a mixture of offtake as well. About 30% is by pipeline…and about 25% we’re selling to railers to bring it south to capture the WTI-Brent spread. And so we’re managing that, I think, very well. And we’re developing a lot of optionality to make sure that we have flexibility to maximize our realizations.”

Exploration-wise, the company is testing wells in Canada’s Canol Shale, where it logged and cored two wells earlier this year. “We’re planning to go back to this area next winter for a multi-well program, including a horizontal well production test,” said Fox. In the Niobrara formation, three wells were drilled in 1Q2013, he said. “Currently, our pace is somewhat limited by gathering and infrastructure build-out here. Our well results are encouraging, but it’s still early days.”

The company remains committed to volume and margin growth this year of 3-5%, said Sheets. The operator has announced $12 billion in asset sales since the beginning of 2012, exceeding an original target to sell of up to $10 billion combined for 2012 and 2013.