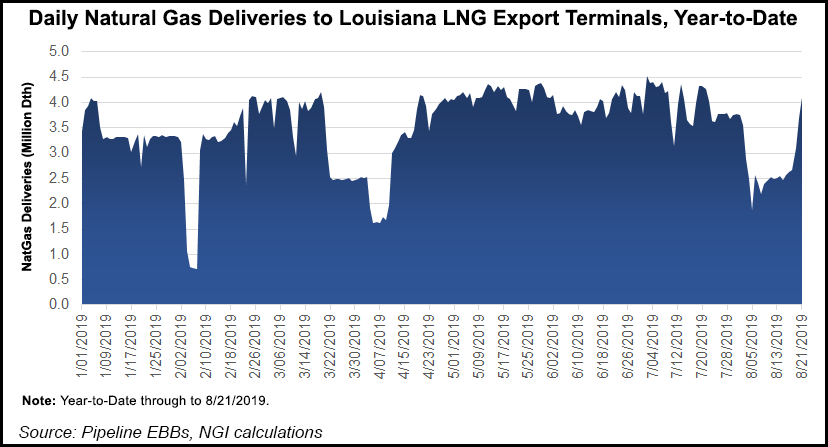 The Commonwealth LNG facility is planned for a 393-acre site on the west side of the Calcasieu Ship Channel and would boast six liquefaction trains capable of exporting as much as 9.5 million metric tons per year (mmty) of U.S.-sourced LNG to overseas markets.

Commonwealth is also seeking authorization to build six LNG storage tanks, one marine loading berth and a 3.04-mile long, 30-inch diameter pipeline to deliver gas to the facility from interconnects with existing interstate and intrastate pipelines, according to information the company submitted to the Federal Energy Regulatory Commission.

The company asked that FERC issue a certificate by January 2021, with a target for starting exports by the first quarter of 2024. Late last year, Commonwealth LNG pushed back its target start-up date by two years versus the timeline laid out in its 2017 pre-filing application with FERC. The company has said it expects to make a final investment decision (FID) in 3Q2020.

Commonwealth LNG, a subsidiary of privately-owned Commonwealth Projects LLC, expects project construction to create an average of 800 on-site engineering and construction jobs and employ as many as 2,000 workers at the peak.

Commonwealth LNG is another in a slew of second-wave U.S. export projects seeking to enter a global LNG market that’s expected to tighten over the next five years. This week, Arlington, VA-based Venture Global LNG Inc. sanctioned its 10 mmty Calcasieu Pass LNG terminal, which is slated for commercial operations in 2022.

Meanwhile, progress on the first wave of U.S. LNG terminals should see feed gas demand continue to push higher into next year, according to analysts at Tudor, Pickering, Holt & Co. (TPH).

“All in, we expect feed gas demand to push 7 Bcf/d by year-end, up from about 4.5 Bcf/d in December of last year,” the TPH team said. “From there, eyes will move back” to the Freeport LNG and Cameron LNG facilities, “as both are expected to add Trains 2 and 3 in the first half of 2020, pushing total demand from LNG north of 9 Bcf/d.”