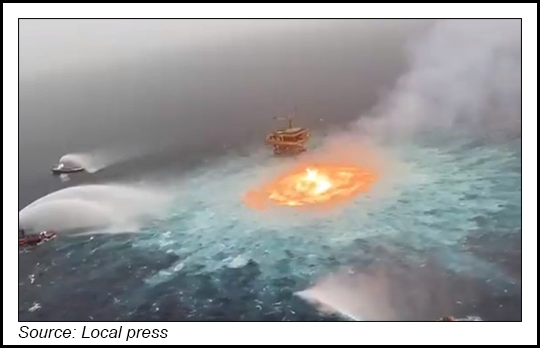 One month after the midterm elections offered hope for change in the Mexican energy sector, some worrying signs have again begun to surface. The case of the offshore Zama field is one such example. In early July, Mexico’s Energy Ministry (Sener) said it granted Petróleos Mexicanos (Pemex) operatorship of the Zama shallow water oil deposit. Zama straddles one block operated by Pemex and another operated by Houston-based Talos Energy Inc.

The original award to Talos resulted from a competitive bidding process that sought to maximize the income that the state might obtain through royalties. The allocation to Pemex comes from a nationalistic policy that sees the allocation of blocks to a private sector company as a betrayal of the nation.

The lack of any distinction between ownership and possession of resources has in the past led to Pemex not always making the best decisions to maximize the value of its production. Mexico would import less gas from the United States, for example, if it didn’t flare off so much of its own production or use so much natural gas and nitrogen for reinjection purposes. This same practice has resulted in nitrogen content in Mexican natural gas that is way above international standards.

It was precisely a leak in a flowline that injects nitrogen into oil operations in the Ku-Maloob-Zaap (KMZ) complex that led to an underwater explosion and terrifying eye-shaped fire that spewed flames up through the surface of the sea and made the global rounds on social media.

Though most observers got their analysis of what went wrong (most blamed capitalism) in Mexico, the event was seen as yet one more Pemex disaster in a long line of similar catastrophes that have not stopped occurring even as the current government does all it can to pump funds into the company and give it every regulatory advantage possible.

The fire can be attributed partly to the fact that the control and accountability mechanisms envisaged in the institutional design of the 2013 energy reform have been undone by President López Obrador. Regulatory bodies that should function as watchdogs in matters of efficiency and safety have lost the reputation of independence and the ability to regulate. No one within these organizations will dare to order repairs, or the cleanup of spills or other damages, without the consent of the president.

The truth is that Pemex’s operating practices and ever-increasing cost of capital are affecting its competitiveness. The current government continues pumping new resources into the state company, but would never consider a reduction in unionized workers or a rethinking of their benefits. The ‘rescue’ of Pemex, as it has been called by this government, not only requires allocating fiscal resources to the company, it also requires that regulatory decisions be biased in its favor. When the latter occurs, practices focused on productivity and profitability lose all meaning and market signals begin to bend out of shape.

Given the rise in the international price of propane, President López Obrador has also in recent days announced the creation of a new state company that will be in charge of distributing liquified petroleum gas (LPG) at a controlled price. LPG is the principal fuel used in the homes of many Mexicans. The company will be operated by Pemex, which historically has only been dedicated to the wholesale sale of this fuel. So Pemex will now enter a segment that it knows little about, that for decades has only been operated by a small group of private companies.

In its concern to mitigate the rise in the price of LPG, the current government has not considered encouraging the use of natural gas, the price of which is consistently cheaper per unit of energy than LPG. Nor has it looked into ways in which the vast natural gas pipeline network could be better used to create new distribution zones, despite the president’s recurring complaint that there is overcapacity in pipelines. López Obrador and his team prioritize the ‘rescue of Pemex’ and ‘energy sovereignty’ without thinking about the health of the energy sector.

The country model that the government imagines is one in which the national oil company is an engine of economic development and job creation. If laws need to be bypassed, then so be it. But what happens when no new infrastructure other than those that meet the needs of Pemex and Comision Federal de Electricidad (CFE) is built? Pemex taking on more responsibility also means more risks and more costs. It means less industrial safety and efficiency. It will mean more, not less imports. And overall, Pemex will be less prepared to face the reality of the Mexican and global energy market when this government ends in 2024.