Mexico’s state oil company Petróleos Mexicanos (Pemex) said an investigation is underway following a fire last Friday (July 2) near one of its Gulf of Mexico (GOM) platforms in the Ku, Maloob and Zaap (KMZ) megafield. 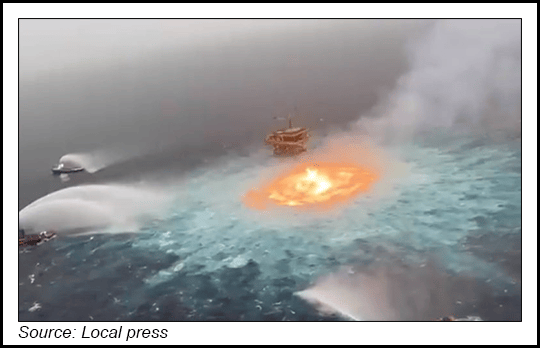 Images of the eye-shaped fire went viral on social media as ships dowsing water on the flames appeared to do little to stem the raging blaze. Pemex said the fire was extinguished about five hours after it started, and the leak was sealed.

Pemex said electrical storms and a natural gas leak from a pipeline used to stimulate oil production caused the accident. There was no oil spillage, and Pemex said its actions “avoided environmental damage.”

“Fortunately there was no loss of life and it was under control relatively quickly,” Mexico President Andrés Manuel López Obrador said on Monday. “It was an accident” and not an act of sabotage, he added.

Pemex did not provide details on when activities would resume in the area. The three large KMZ offshore fields together are considered Mexico’s main oil area. Total production in May at KMZ was 622,000 b/d, or 37% of total production, according to data from upstream regulator Comisión Nacional de Hidrocarburos (CNH).

KMZ, however, has shown steady decline. Production is down a total of about 220,000 b/d in the last five years, according to NGI calculations.

“The fire most likely is the result of the focus on bringing on new production and deferring maintenance,” Mexico energy consultant Gonzalo Monroy told NGI’s Mexico GPI.

On the same day as the fire, Mexico’s Energy Ministry (Sener) said it granted Pemex operatorship of the Zama shallow water oil deposit. Zama straddles one block operated by Pemex and another operated by Houston-based Talos Energy Inc.

Sener in July 2020 had instructed Talos and Pemex to draw up a unitization and unit operating agreement to jointly develop the project in Mexico’s Sureste Basin.

Zama was discovered in 2017 by a Talos-led consortium at shallow-water Block 7. It is considered the largest oil find by a privately held operator since the Mexico energy sector was opened to nonstate actors during the energy reform of 2013-2014.

The deposit contains an estimated 670 million boe of gross recoverable resources. Zama also was named “Discovery of the Year” for 2017 by the Association of International Petroleum Negotiators.

An evaluation conducted by Netherland, Sewell & Associates Inc. in 2020 found that most of discovery was within the Talos block. Pemex said in May the opposite conclusion had been reached in a new evaluation by an unnamed third party. The state company subsequently scrapped plans to drill an appraisal well delineating the deposit.

Talos executives said only three days prior to the Sener decision, they had received a letter directly from Pemex arguing for operatorship.

“After six years of significant investments in Zama and the Mexican economy, as well as the delivery of a Zama development plan that is credible and in line with the objectives of Mexico, Talos is very disappointed with Sener’s sudden decision to award operatorship to Pemex, especially in light of the timing under which the award occurred,” Talos management said in a statement.

Talos “remains committed to maximizing value for its shareholders from its Zama asset and will explore all legal and strategic options to do so.”

The Zama decision is yet another in a long line of moves by Mexico’s current government to favor Pemex over private sector competition. That includes granting new permits in the hydrocarbons segment. The government has also canceled new oil and gas rounds.

Monroy said Talos would likely file a petition with Sener to reconsider its position. “And if they are unsuccessful they will go to court, or activate the dispute clauses” in the United-States-Mexico-Canada-Agreement, he said.