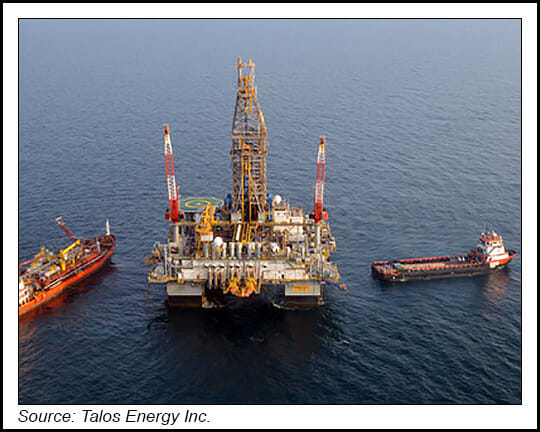 Assuming unitization is completed “on a timely basis,” Talos expects to reach a final investment decision or FID for the shallow water, oil-rich block by end of 2021, Duncan said during a fourth quarter earnings conference call for Houston-based Talos.

Zama was discovered by Talos and its partners in 2017 through an exploration well drilled at offshore Block 7, which was awarded to the consortium in Mexico’s Round 1.2 bidding process in 2015.

Talos is the operator of Block 7 with a 35% stake, with the remaining participation held by Premier Oil plc  (25%) and Wintershall Dea (40%).

The resource, however, extends into a neighboring Pemex block. FID has been delayed as the consortium and Pemex hammer out the details of a joint operating agreement.

NSAI found that about 60% of Zama’s best-case gross recoverable resource is located within block 7, with the remaining 40% in the Pemex block.

If the Block 7 consortium were to end up with a 60% stake in the discovery, this would give Talos a participating interest of roughly 21% in Zama.

It remains unclear whether Talos will emerge from unitization talks as the operator.

Talos management has maintained a diplomatic tone when discussing the matter publicly.

“Zama’s interesting because we really started talking in earnest [with Pemex] last year,” Duncan said. “We had to catch them up on all the technical stuff. As you know, we were the ones who gathered all of the technical data.”

Information such as core data and fluid data “had to be shared [to] make sure they fully understood it, frankly to give them a level playing field in these negotiations…it was an obligation for us to do it, we were happy to do it, and the fourth quarter really shifted to more of a commercial discussion and we started picking up the pace on those items,” Duncan added.

Those items include “operatorship,” as well as “equity splits in the beginning that get redetermined later,” voting rights, and other “nuances that would come with an operating agreement when this is finalized,” Duncan said.

Duncan said, “our hope is we will meet that deadline…and then we’ve got to wait on [Sener] to weigh in on where we are, and then we’ll announce that.”

In the meantime, Duncan said, the consortium has “effectively completed” most of the front end engineering and design work for the project.

Once the project design and the unitization talks are complete, “this thing can start moving…towards FID and that line of sight to first production becomes a little more clear.”