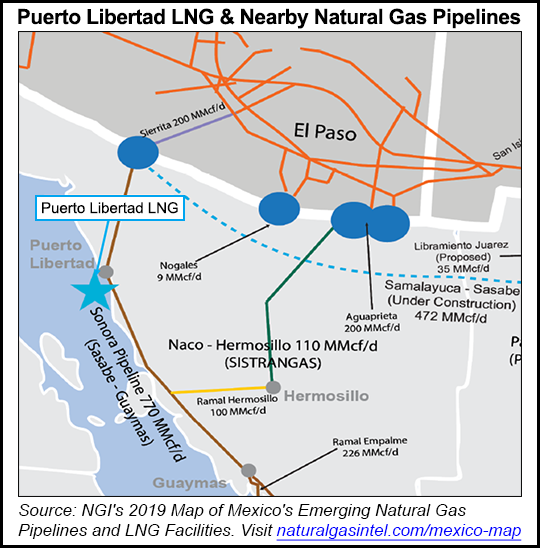 Mexico could very well form a liquefied natural gas (LNG) hub on its Pacific Coast. The business model is this: a company buys gas in Texas, transports the molecule by pipeline to a Mexican port in the Pacific where it is liquefied and shipped on to Asia. Abundant gas supply with the lowest relative prices in the world and long-term, persistent demand for gas in China and India, coupled with a route that skips having to go through the Panama Canal means opportunities for efficient companies with experience in liquefaction.

A project of this nature can also take advantage of unused capacity in some of the pipeline segments that have been anchored by the Comision Federal de Electricidad (CFE). For the CFE, it’s a way to dispose of significant volumes of contracted gas that today are not associated with consumption at its plants, or other buyers in the domestic market. It is even possible to see potential synergies triggering expansions of transportation routes and greater profit opportunities for CFE.

LNG projects mean direct investment on Mexican soil. If the country becomes a physical intermediary for gas export operations from the United States, it will imply jobs in Mexico, the formation of an industry around the procurement of goods and services necessary for the plant, and tax collection for the government. A project of this nature could also ease CFE’s financial obligations and provide an opportunity to obtain income not foreseen when the pipeline expansions were planned. This is an opportunity for Mexico and the CFE.

Recently I spoke with Doug Shanda, CEO of Mexico Pacific Limited (MPL). In meticulous detail, he explained the way he has advanced in obtaining permits for a planned LNG project in Puerto Libertad – basically, through committed communication with the different authorities, at all levels of government. Due to its location in Puerto Libertad, the interaction with the communities and the government of Sonora has focused on showing that a facility of this nature would be good for the area and will not pose any environmental ramifications. In his experience, dialogue with interlocutors within regulatory entities has occurred mainly in the technical field. Broadly speaking, he does not see a significant qualitative difference in the communication work that must occur with the Mexican authorities with respect to the way it happens in the rest of North America. Thus, last year MPL obtained from CRE the liquefaction permit.

The MPL project neatly summarizes the type of opportunities to be developed if Mexico participates and is considered an active partner in the North American region. The distance from Waha in West Texas to Puerto Libertad is similar to that between the same basin and the port of Brownsville in Texas. But if the end destination is Asia, a site in the Pacific can have a significant advantage in shipping costs. The key is to understand that the three nations that make up the North American subcontinent associated through a trade agreement are complementary economies.

All three countries are extremely rich in hydrocarbons and other energy resources. Optimal use of these resources will occur when capital and technology flow without restrictions or red tape throughout the region. The opening in the Mexican energy sector resulting from the structural reform of 2014 was in essence an opening of the last nationalist bastion in the North American region from an energy perspective. Since 1995, the participation of foreign private investment has been a feature in pipeline transportation and distribution and even in LNG storage. With the energy reform’s legal framework, it was possible to conceive projects such as Energía Costa Azul that did not have the exclusive purpose of meeting the demand for gas in Baja California but even taking advantage of international interconnections to deliver regasified LNG in California and Arizona.

Since the 1990s, in the different waves of investment in energy infrastructure in Mexico, foreign private capital has been important. The activities of Pemex and CFE were complemented by different agents willing to invest in the niches that the regulation opened up. Gas distribution areas, three storage and regasification terminals, independent energy producers, cogeneration projects, energy self-supply schemes, the extension and expansion of the gas network, all were propelled by private capital. The dominant power of the state companies has never been undermined by private participation. Pemex’s financial foundations were undermined not by asymmetric regulation but by the voracious and short-sighted policy of past governments. We are in a similar situation with the current government.

In a grand show during President López Obrador’s morning press conference on October 5, with notable figures from the private sector and the highest-level public servants, the government announced a list of projects intended to be an infrastructure plan. For the energy sector, they include an ethane terminal in the port of Pajaritos, the installation of a coker plant in the Tula refinery, the rehabilitation of a coker unit in the Cadereyta refinery and an LNG plant not in Puerto Libertad or in Ensenada, but in Salina Cruz, in the southern state of Oaxaca.

This announcement, which seeks to reaffirm trust between private investors and the government, is a surprise for several reasons. In the first place, the projects list appears just as permits for companies in the sector that represent competition to Pemex or CFE are being suspended. There have even been explicit instructions from the CRE head to the staff in charge of analyzing hydrocarbons and electricity issues not to resolve any pending issues.

What’s also concerning about the plan is how little it addresses issues that deserve attention, such as the operational emergency in Baja California that has put the continuity of electricity supply in that area at risk. The president has said this list is the first of many to come. Hopefully this will be high on the agenda. It should at least be more important than a liquefaction project promoted by CFE.

Along the same lines, the plan does not seem to have a proper connection with reality. A good gesture would have been to mention projects for which much of the groundwork is already done, such as MPL or the Energía Costa Azul plant.

In contrast, a poorly delineated liquefaction project was chosen with investment amounts that seem not to correspond to a liquefaction facility of a relevant scale. Nothing was said about the business model that is being sought, if a new pipeline to Salina Cruz will be built, nor was their mention of where the gas will originate.

It is quite possible that this list is more of a sketch, and therefore the project is in very early evaluation phases.

Still, the government would have gained greater credibility if instead of promises and investment commitments on unknown projects it had simply opened the door and eased the way for those who already have achievable projects in the works.