The rig count may be half of what it was a year ago, but Northeast dry gas output just keeps getting stronger, say analysts. 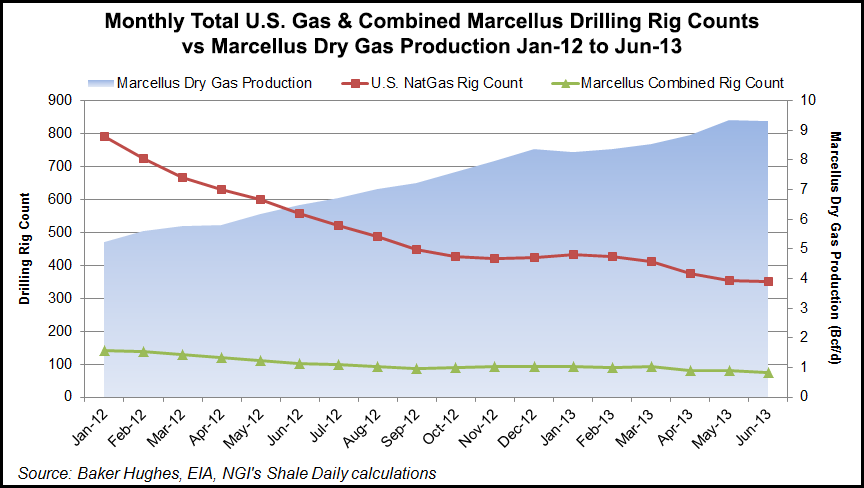 Five years since natural gas from shale began making an impact on U.S. production, supply growth continues to be more robust than consensus estimates, with nearly all of new domestic supplies now coming from the Northeast, otherwise known as the Marcellus Shale, according to analysts.

“Consensus continues to call for an eventual rollover of supply, and we tend to agree,” Adkins and Freeman wrote. “However, we don’t see this happening anytime soon. The fact remains that drillers are going to continue to tap the vast domestic resource potential using the most efficient means possible, driving an oversupply of both oil and gas for a long time.”

The U.S. rig count forecast remains below consensus, “but we believe pad drilling, footage drilled and rising type curves more than offset that decline.” The Raymond James analysts recently fine-tuned projections for each major onshore basin and now see gas supplies growing 2.4 Bcf/d year/year in 2014 and reaching 79 Bcf/d, or 12 Bcf/d plus, by 2020.

Operators are becoming more efficient every day compared with a year ago, which has resulted in better well productivity and more wells per rig. However, the dry gas rig count has collapsed as better prices for oil drew exploration and production operators away.

“The shocking revelation — to many that aren’t doing the bottoms-up modeling — is that U.S. gas supply is still growing despite the collapse in gas drilling,” wrote Adkins and Freeman. The gas rig count has been cut in half year/year, but the U.S. Energy Information Administration (EIA) reported that July dry gas production rose 1.2 Bcf/d year/year (seeShale Daily, Oct. 2).

“Despite losing 20 gas rigs, Marcellus dry gas production is up a whopping 2.3 Bcf/d this gas year,” Raymond James analysts noted. It’s because “it actually works at sub-$3.00 gas prices as a result of refined completion techniques and pad drilling that are generating higher rate wells. The scary thing is that these numbers could even be higher if infrastructure constraints were not choking back production.”

There’s a lot more Marcellus gas where that came from. There’s a “healthy backlog” of uncompleted Marcellus wells and new infrastructure to relieve some constraints in the next two years and the play by itself should add “roughly 3.5 Bcf/d of takeaway capacity this year followed by 5-7 Bcf/d of projected takeaway capacity coming online in 2014.”

A recent slowdown in the gas growth rate primarily is attributed to a “more aggressive shift away from dry gas drilling” to liquid targets, said Raymond James analysts. In addition, infrastructure constraints limited gas output from the Marcellus and Utica shales, and wintry weather negatively impacted growth in the first three months of this year.

Don’t be lulled into a false sense of complacency, they said. “We caution investors not to take this year’s slowdown in the growth rate as an indication of years to come.” Raymond James’ bottoms-up model indicates that 2014 gas supply should be up 2.4 Bcf/d from 2013. What’s even more staggering is that as infrastructure debottlenecking continues and gas drilling activity rebounds in 2015/16, we think U.S. gas supply will be up plus-2.6 Bcf/d in 2015 and plus-2.2 Bcf/d in 2016.”

That huge surplus overpowers every other gas play in the onshore over the two periods. In the South/Southeast, which includes Texas and Midcontinent production region gas supplies between 2005 and 2010 rose 1.6 Bcf/d — exactly the same as in the Marcellus However, from 2010 to 2013, southern gas output only rose by 0.2 Bcf/d.

“It underscores how important the Marcellus is,” said Stuart.

“We are not exactly bullish,” said Stuart. However, “we are only a little big bullish this coming 1Q2014 because we think supply and demand for U.S. natural gas looks quite interesting this winter…What looks good…is quite simply, for the first time in ‘forever’ we can give you a negative residual on end-of-season storage projections.”

By the end of October, U.S. stores should be around 3.80 Tcf, but they could fall to 1.55 Tcf by March 2014 under normal weather, according to analyst calculations.

“In addition, we think the supply side may be short if indeed there’s not enough of midstream capacity additions, in the Marcellus especially, coming onstream,” said Stuart. “Of course, we are forecasting normal weather and it would have to cooperate for our relatively bullish forecast to come true.”

What has happened to the markets in terms of recent under performance is mild weather, as well as headwinds from nuclear generation and “terrific growth” in wind generation, which didn’t help the gas markets, said Stuart. Gas demand is rising, though, and “we’re going to have terrific growth.”