Energy-related carbon dioxide (CO2) emissions dropped sharply in 2020 in the United States, brought lower by petroleum demand destruction created by the pandemic and deepened by travel limitations imposed by governments to slow its spread, according to a new federal projection. 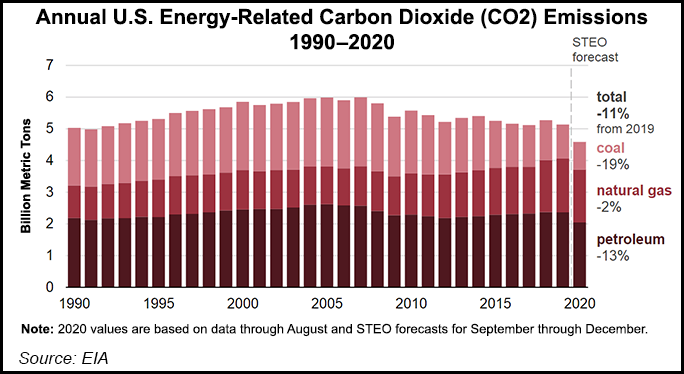 As the pandemic’s grip tightened last spring, road and air travel diminished suddenly, the agency noted, cutting off demand for gasoline and jet fuel – and substantially curbing emissions as a result.

EIA based the projection on confirmed 2020 data through August and its own estimates for September through December. The sharpest plunge in energy demand – and by extension, CO2 emission –developed in April, when state governments across the country introduced lockdowns.

Emissions in April fell to 307 mmt, down from more than 400 mmt prior to the onset of virus outbreaks, according to EIA. The April figure marked the lowest value reported in records that date to 1973.

“Many of this year’s changes in energy-related CO2 emissions are attributable to the economic and behavioral effects the COVID-19 pandemic has had on energy consumption,” EIA researchers said.

The secular trend away from coal and toward natural gas to fuel power plants, however, also played a continuing role in reducing emissions, the agency said.

For all of 2020, emissions from coal will drop 19% from the prior year, the agency projected, and emissions from petroleum and gas will fall 13% and 2%, respectively.

In 2021, EIA forecasts that energy-related CO2 emissions will increase nearly 6% from the 2020 level – though remain below 2019 levels — reflecting increased energy consumption alongside a steadily recovering economy.

Most economists are projecting steady economic expansion next year. Morgan Stanley economists, for example, estimated that the nation’s gross domestic product will increase nearly 6% in 2021 after contracting 3.5% this year, as coronavirus vaccines become increasingly available and the pandemic gradually fades.

“Consumer spending has nearly returned to pre-COVID-19 levels, while average personal incomes of U.S. households surpassed pre-pandemic levels in September, even after the first round of (federal) fiscal support expired. These and other factors suggest a sustainable U.S. recovery, even amid a difficult winter, with projected GDP growth of 5.9% in 2021,” said Chetan Ahya, Morgan Stanley’s chief economist.

More than 99% of energy-related CO2 emissions are tied to petroleum, coal and natural gas.

EIA said petroleum accounted for an estimated 45% of U.S. energy-related CO2 emissions in 2020, driven by the transportation sector. Natural gas, the agency said, accounted for an estimated 36% of emissions this year. “The electric power sector consumes the most natural gas of any sector,” researchers said, and while electricity consumption declined slightly this year, “the use of natural gas to generate electricity increased.”

Coal CO2 emissions this year, meanwhile, could reach the lowest annual level on record — 4,597 mmt, or 19% of the total, EIA said. In the electric power sector, where most coal is consumed in the United States, coal has lost market share to natural gas and renewables for 13 consecutive years, the agency said.