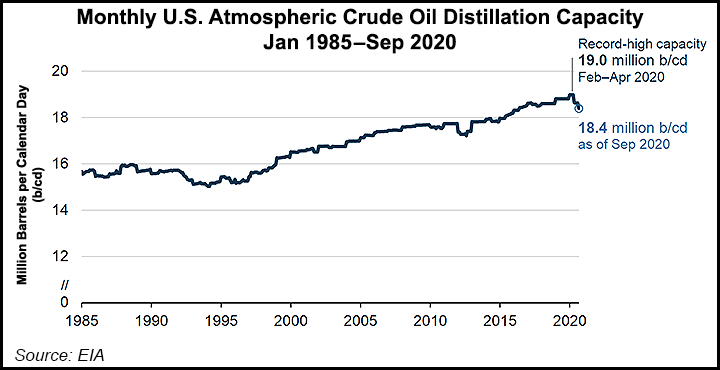 As of Sept. 1, the latest available data, the United States had 18.4 million bbl per calendar day (b/cd) of operable petroleum refining capacity, the lowest level since 2016, according to the U.S. Energy Information Administration (EIA). The year-to-date figure is down from 19.0 million b/cd last year, a level that marked a 1% increase from the previous annual record set in 2018.

Operable refinery capacity is the amount in operation or which could be brought into production within 90 days, according to EIA.

Capacity dropped by 335,000 b/cd from April to May, the agency said, after the Philadelphia Energy Solutions refinery in Pennsylvania closed. It declined another 19,000 b/cd in June when Marathon Petroleum Corp.’s refinery in Dickinson, ND, closed amid light demand and as part of a plan to convert to a renewable diesel plant.

Additionally, the declines this year were driven by closures in California, New Mexico and Wyoming, EIA noted.

The number of operable refineries in the United States, excluding U.S. territories, had held steady at 135 in 2019, according to EIA.

Total petroleum product demand last week rose 0.9% year/year. It was the first increase since the week ending March 6, EIA data show, though demand in the comparable week of 2019 marked the lowest level of that year. On a four-week moving average basis, demand was down 7.4% year/year.

The global oil demand outlook remains shaky in the near term as virus outbreaks grip the United States, parts of Europe and other regions of the world, limiting travel and keeping a lid on demand for jet fuel and gasoline.

Oil prices, however, have strengthened in recent weeks as vaccines neared approval and expectations mounted for an end to the pandemic in 2021. After plunging more than 70% earlier this year, West Texas Intermediate futures climbed above $47.00/bbl in intraday trading Thursday.

Most forecasts call for an oil demand recovery next year alongside an easing of the pandemic, though outlooks generally call for continued sluggishness early in 2021 and a gradual buildup in fuel use as the year wears on.

In its most recent forecast, the Organization of the Petroleum Exporting Countries estimated that global oil demand would expand by 6.2 million b/d in 2021 after contracting by 9.8 million b/d this year.

The International Energy Agency said it expects an annual global contraction of 8.8 million b/d this year, followed by an increase of 5.8 million b/d in 2021.

SAMCO Capital Markets’ Jacob Thompson, a managing director, said energy companies have reason for optimism in 2021. However, he told Shale Daily that the pandemic could have lasting impacts on oil demand.

“The concern is, with oil, is there some kind of permanent reset when it comes to business travel?” Thompson asked. “Will there just be a lot less flying for business and, possibly, a lot more people telecommuting to work and not driving into the office every day? “Not all, but some of the demand we’ve lost could be hard to get back.”