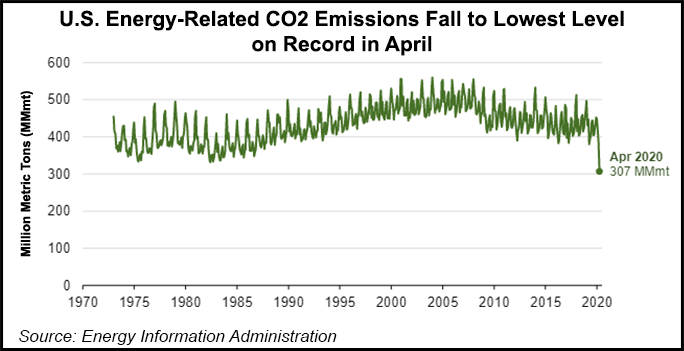 The U.S. Energy Information Administration (EIA) said in a report Friday CO2 emissions totaled 307 million metric tons (mmt) in April, down from more than 400 mmt prior to the onset of virus outbreaks. The April figure marked the lowest value reported in records that date to 1973.

The largest decreases in carbon emissions in April occurred in the transportation sector, EIA said, as “consumer responses to the coronavirus, stay-at-home orders, and other travel restrictions that were in place throughout the country in April reduced consumption” of motor gasoline and jet fuel.

More than 99% of energy sector-related CO2 emissions are tied to petroleum, coal and natural gas.

EIA said even after the steep decline in petroleum-related emissions, the United States in April still emitted more CO2 from petroleum (133 mmt) than from natural gas (122 mmt) or coal (51 mmt).

While electricity generation in April was 7% lower than a year earlier, energy-related CO2 emissions still were 16% lower.

In the most recent Short-Term Energy Outlook (STEO), EIA estimated that energy-related CO2 emissions bottomed out in April. Government researchers predicated emissions would gradually rise alongside increased commercial and industrial activity, which picked up in May after states lifted virus-related restrictions. Still, the agency expects total CO2 emissions in 2020 will be 11% lower than the year before. Emissions in 2021 are forecast to climb year/year but still be 6% lower than 2019.

EIA cautioned in its latest STEO that projections are subject to “heightened levels of uncertainty” caused by a pandemic that continues to evolve. The outlook presumed economic growth throughout the second half of 2020, following an historic drop in gross domestic product (GDP) in the second quarter. U.S. GDP during 2Q2020 declined a record 32.9%, annualized.

Total known coronavirus cases as of Friday exceeded 5.5 million in the United States, according to Johns Hopkins University data. Reported cases slowed recently, falling below 50,000 cases a day from Aug. 15 through Thursday (Aug. 20), after coming in above that threshold the week before. However, the data indicated the decline likely reflected in part decisions by universities and schools to move online in recent days following campus outbreaks.

The uncertainty about the Covid-19 spread and duration, along with unknowns about additional rounds of federal financial support for struggling businesses and unemployed Americans, leave economists dubious about the severity of the pandemic’s impact on the U.S. economy.

“The overall economic outlook depends on the virus, efforts to contain it, and the degree of fiscal support,” said chief economist Scott Brown of Raymond James & Associates Inc.