Global energy researchers are forecasting China, the world’s largest LNG importer, is on track to record the largest year-to-year drop in volumes since it started importing the super-chilled gas. 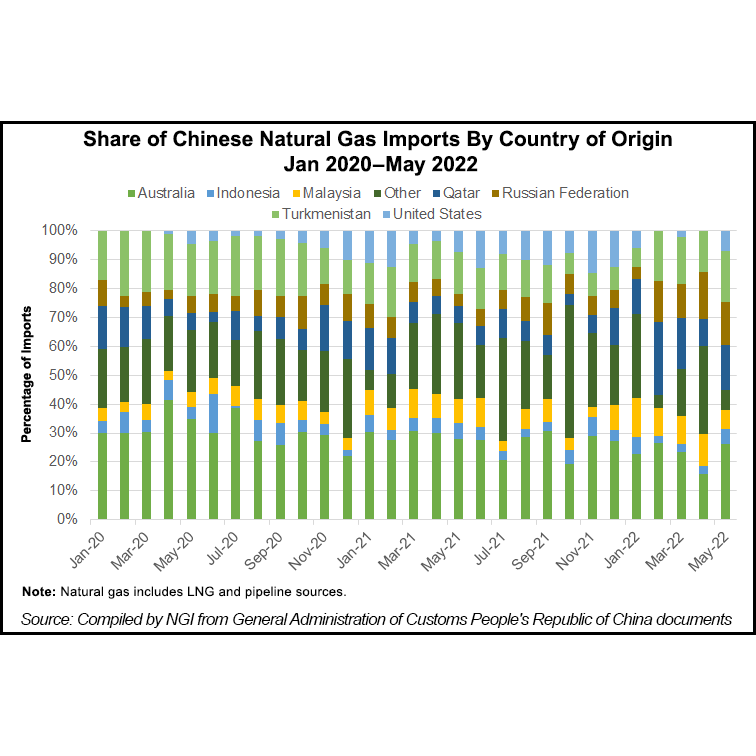 Citing unprecedented liquefied natural gas market volatility and inflationary pressure, Wood Mackenzie recently predicted China’s imports would drop 14% by the end of the year. That means China’s LNG imports could fall to 69 million tons (Mt) for the year, according to Wood Mackenzie analysts.

China surpassed Japan at the end of last year to become the world’s top importer of LNG. Months later, multiple region-wide Covid-19 outbreaks, energy volatility and inflation have contributed to a slowdown of Chinese imports.

Bloomberg New Energy Finance analysts reported Thursday that Chinese LNG demand dropped 22% in the first six months of the year compared to the same period last year. They also wrote the trend was expected to continue, with only a slight increase in demand during the year’s second half.

Since before Russia’s February invasion of Ukraine, Europe’s price premium for LNG has been outpacing Asia’s, attracting a large volume of spot market cargoes usually purchased by Asian buyers. During the first six months of the year, Wood Mackenzie estimated the average landed price of LNG imports in China averaged $15/MMBtu. The average was almost double that of the same period last year.

Even as Dutch Title Transfer Facility futures for September have been headed downward through the week, TTF remains about $10 higher than the Japan-Korea Marker.

Wood Mackenzie forecast spot LNG delivered to China’s eastern coast could average $43/MMBtu during the second half of the year.

Along with periodic drops in energy demand during pandemic lockdowns, China has also been diversifying its natural gas sources to avoid high import costs. Wood Mackenzie estimated China’s domestic production increased 4.9% year/year during the first half of the year. The country also saw an 11% increase in pipeline imports.

Most of those gains in pipeline imports have come from Russia, which has been targeting increased business with China as Ukrainian allies eschew its commodities. China also bought 2.35 Mt of LNG valued at around $2.16 billion from Russia in the first six months of the year, according to a South China Morning Post review of Chinese customs data.

The country’s latest five-year energy plan released in March also placed a renewed importance on coal as a backstop for energy demand, lowering expectations for growth in gas-fired generation.

The latest natural gas demand review from the International Energy Agency forecast the Asia-Pacific region to account for half of the expected 140 Bcm growth in global gas demand by 2025. However, at least in the short-term, China is expected to prioritize affordable energy while LNG prices remain elevated.

“China is unlikely to change its coal policy as the backstop of energy security in the near future,” Huang said. “National policy is unlikely to encourage gas demand in a significant manner due to concerns over supply chain pressure and affordability.”