Chevron Corp., Royal Dutch Shell plc, and TotalEnergies SE are taking to the skies with Canada’s GHGSat as part of a year-long research project to detect offshore methane (CH4) leaks by satellite. 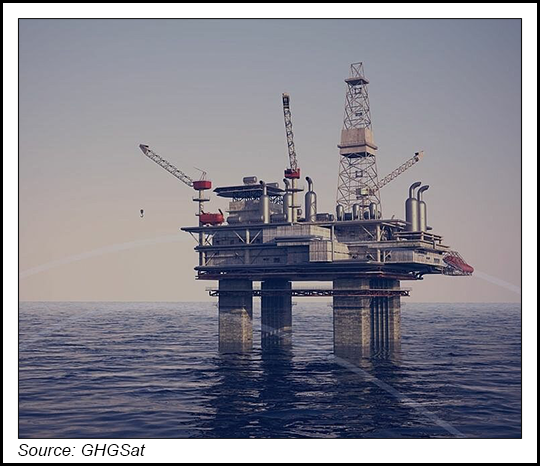 The three supermajors are supporting the project by allowing six of their offshore facilities to be observed, including ones in the North Sea and the Gulf of Mexico. An initial feasibility assessment will begin later this year with satellite readings checked against measurements taken onboard platforms by hand-held devices and drones. The trio agreed to participate in the study following successful demonstration trials.

“This is a GHGSat research project but one driven by customer demand,” said GHGSat CEO Stephane Germain. “Offshore producers are looking for ways to confirm their reported emissions. With this new research, we hope to show that space can provide the data they need, in a timely, reliable, and cost-effective way.”

The study aims to demonstrate the feasibility of the world’s first high-resolution satellite-based monitoring of CH4 emissions at sea using GHGSat’s Glint Mode technology. The patented infrared sensor identifies CH4 by its electromagnetic radiation signature as it absorbs sunlight bouncing off the surface of the ocean. Montreal-based GHGSat takes measurements from more acute angles, situating the spacecraft’s sensor on the point at which the sun’s light reflects most strongly off the ocean — the ‘glint spot’.

GHGSat’s satellite travels at around 7.5 km/s, fast enough that 100 times more light can be sent to the gas detecting instrument. In 2018, the company began working with Total to refine its measurement thresholds to capture increasingly smaller emissions. In October 2020, the two set a world record by quantifying and detecting the smallest controlled leak to date.