Chevron Corp. increased its upstream oil and natural gas volumes by 7% during the first three months of the year, but investors Friday were more keen for details about the potential takeover of Anadarko Petroleum Corp.

The San Ramon, CA-based supermajor and Anadarko, frequent partners in the Gulf of Mexico (GOM) deepwater and elsewhere, agreed to a tie-up earlier this month valued at $50 billion, including debt.

Occidental Petroleum Corp. (Oxy), whose management team had been wooing Anadarko for almost two years, has made a counter offer estimated at around $57 billion, setting off an unprecedented bidding war in the exploration and production sector.

Chevron CEO Michael Wirth said the combination with Anadarko would strengthen not only their estimable Permian Basin positions, but it would build more deepwater GOM capabilities and expand the global liquefied natural gas business.

“We believe this transaction will unlock significant value for shareholders,” Wirth said.

During a conference call with analysts, he said, “I’ll just remind everyone that we’ve got a signed deal that has been approved by both boards and we’ve moving forward with integration planning.”

A sizeable group of employees from each company has already met, Wirth said.

Oxy’s offer is structured as a 50-50 cash-and-stock deal, while Chevron’s is 75% stock and 25% cash. If necessary, the Chevron deal could be restructured, CFO Pierre Breber said.

“We could put more cash in if that’s what Anadarko wanted to do,” Breber told analysts.

For its U.S. oil and liquids production, Chevron fetched an average sales price of $48/bbl, versus $56 a year ago. For domestic natural gas, Chevron received $1.64/Mcf, a sharp tick lower from the year-ago price of $2.02.

U.S. downstream operations earnings plunged by more than half year/year to $217 million from $442 million, primarily because of lower margins on refined product sales and lower earnings from the 50%-owned Chevron Phillips Chemical Co. LLC. Domestic refinery crude input decreased 7% to 861,000 b/d, while product sales of 1.19 million b/d were up 1% year/year. 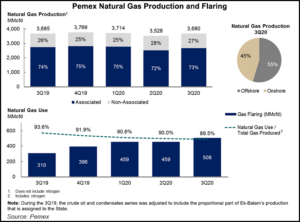 Management at Mexico’s Petróleos Mexicanos (Pemex) thinks its strategy to focus on 20 new priority fields is starting to pay dividends, with 123,000 b/d of new production added from 15 producing areas by the end of September. Thirteen wells were drilled at the priority fields during the third quarter, and the company will complete and…