Chevron Corp. continues to see lower demand for oil and natural gas from Covid-19, but it is focusing on what it can control, CEO Michael Wirth said. 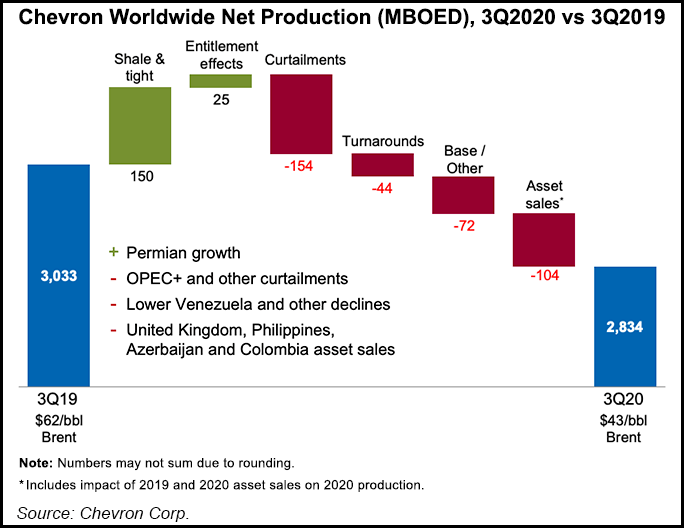 The San Ramon, CA-based major issued its third quarter results Friday, highlighting the completion of its takeover of Noble Energy Inc. and the startup of some alternative energy ventures.

CFO Pierre Breber helmed a conference call with investors with downstream and chemicals chief Mark Nelson. Wirth did not participate, but said before the call that the company was keeping its eye on what it could control, i.e. “safe operations, capital discipline and cost management.”

Organic capital expenditures were down 48% from 3Q2019, while operating expenses declined by 12%.

Breber was asked how Chevron planned to monetize the Eastern Med gas and whether there had been discussions about building out liquefied natural gas (LNG) export options or additional pipeline opportunities.

Leviathan is “in an area where there’s demand opportunities,” Breber said, but the focus for now is to integrate Chevron and Noble. “We’re going to work with potential customers, existing customers, future customers to find the most cost efficient way to develop that resource. So, there is upside to it and again there is a market. But that will be determined all in time.”

The management team also was questioned about Chevron’s Gorgon LNG project in Australia, the three-train facility that it operates. The second train was shut in May after welding cracks were discovered.

“The weld repairs are complete” on Train 2, and “so we’re now in the process of getting back online,” Breber said. “We’ve started the commissioning process from the extended turnaround. The next steps are to dry out the systems and then we’ll begin to cool down.

“We expect this to take several weeks, which will put first LNG production in the second half of November.”

Train 1 is to be taken offline once the second train is in operation. How long the first train is down will depend on whether it needs repairs, Breber said. “And then sequentially, we would look to Train 3…”

Meanwhile, Nelson told investors during the conference call that the downstream and chemicals operating environment has improved from the second quarter, “but it’s still challenged,” with jet fuel demand only modestly recovered.
Chevron’s worldwide net production in 3Q2020 was 2.83 million boe/d, off 7% year/year. The decrease was attributed to curtailed output and asset sales. U.S. net output averaged 98,000 boe/d, up 48,000 boe.

Production increases, mostly from the Permian, were partially offset by normal field declines and planned maintenance in the Gulf of Mexico. The net liquids component of U.S. output increased year/year by 1% to 731,000 b/d. Net gas production increased 21% to 1.51 Bcf/d.

International upstream earned $119 million, compared with $2 billion a year ago.

U.S. upstream operations earned $116 million in the quarter, compared with $727 million a year earlier. The average sales price was $31/bbl for oil and liquids, down from $47. Natural gas averaged 89 cents/Mcf, compared with the year-ago average of 95 cents.

Chevron fetched an average sales price of $39/bbl for its international oil and liquids from year-ago prices of $56. The average natural gas sales price was $3.89/Mcf, compared with $5.62.

Organic capital expenditures were down 48% from 3Q2019, while operating expenses declined by 12%.

This year’s capital spending is trending below guidance, Breber said.

“Looking ahead we expect next year’s capital budget to be $14 billion below the combined 2020 guidance from Chevron Noble and well below Chevron’s five-year guidance from our March investor day,” he said. “Operating expenditures in the quarter were more than 10% lower than our 2019 quarterly average, ahead of our guidance.”