Chart Industries Inc. CEO Jill Evanko expressed optimism on Thursday that up to four large U.S. liquefied natural gas (LNG) export projects could be sanctioned early next year following a flurry of activity in the past two months. 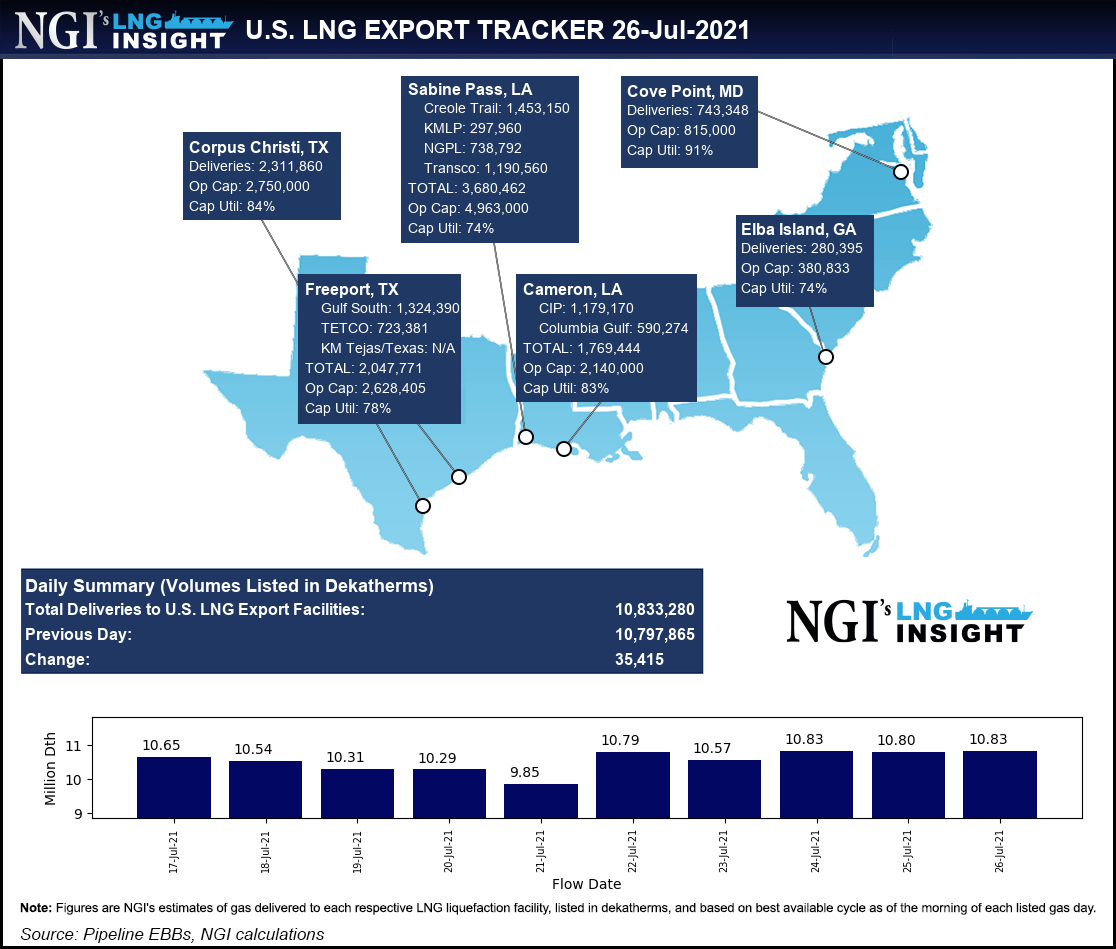 Evanko said she was “very bullish on one to four U.S. Gulf Coast export projects that already have FERC approval moving ahead” to a final investment decision (FID) in the first half of 2022, she said during the Atlanta-based equipment manufacturer’s 2Q2021 earnings call. “There was considerable 2Q2021 activity announced in this space, and there also has generally been more market and government acceptance of LNG in recent months, a far different attitude than was in 2020.”

The projects in question are Tellurian Inc.’s Driftwood LNG project and Venture Global LNG Inc.’s Plaquemines project, both in Louisiana, and Sempra’s Port Arthur LNG and Cheniere Energy Inc.’s Corpus Christi Stage 3 expansion, both in Texas. The Tellurian and Cheniere projects have recently gotten a boost from commercial agreements, while Sempra said last month it would push an FID on Port Arthur to next year. Venture Global, meanwhile, plans to move forward at Plaquemines LNG with an initial 10 million metric tons per year (mmty) phase, half of the facility’s planned capacity, Evanko said. Each facility would use Chart equipment.

“I think May and June have been as active as I’ve seen in four to five years of what they’ve done,”she said during the call.

She added that the “Big LNG” projects, as Chart calls them, are not as cost-sensitive as they were in the past year or two.

“These are projects that have survived and gotten to the point they have regulatory approval,” she said. “And they also know that there’s a period of time that they’ve got to get going in order to construct this, if they’re going to have a part in the global LNG molecule party.”

Including the U.S. Gulf Coast projects, Evanko said she expects about eight or nine projects to be sanctioned in the short-term. However, the company is not including additional “Big LNG” orders in its 2021 or 2022 outlooks outside of the $21 million already logged this year for deliveries to Venture Global’s Calcasieu Pass facility in Louisiana.

On the small-scale side, Chart saw continued strength. The company received a notice to proceed (NTP) on the Fast LNG concept being developed by New Fortress Energy Inc., and it had received a letter of intent for a small-scale LNG plant in the northeastern United States. Evanko said it had not yet been booked, but expects  an NTP around the end of this year.

The company also saw record orders for LNG vehicle tanks in the second quarter, including its largest ever bus order. In addition, the company noted continuing “widespread demand” for the vehicle tanks as well as fueling stations and trailers.

Second quarter ordering activity included 133 new customers, 63% of whom were outside North America. The company also landed orders for 16 first-of-a-kind applications, including the first LNG road tankers to be operated in South Africa. Chart also noted record order and sales activity in Europe, the Middle East and Africa, strong industrial gas orders, and a record $81.9 million in hydrogen orders.

“One of the beautiful parts of our business is that we aren’t reliant on picking one winner in the clean energy transition,” she said. “We benefit from all of them having a place, that’s also the benefit of being molecule-agnostic.”

Looking forward, Chart sees hydrogen and helium investment ballooning, with the total addressable market (TAM) growing from about $3 billion in the near term to $24 billion in 2030. That represents a much larger opportunity than carbon capture, utilization and sequestration (CCUS), which Chart estimates having a near-term TAM of $850 million and a 2030 TAM of $5.6 billion.

When asked about why the hydrogen opportunity is believed to be so much larger, Evanko said the company had arrived at the conclusions based on customer conversations and market sentiment.

“Around hydrogen, these projects are happening and they’re spending, and I think that a more significant ramp happens around mid-decade,” she said, whereas CCUS projects are in earlier phases of development. She added that the biggest chunks of the carbon capture market would likely come from post-combustion developments instead of direct air capture.

Nearer term, Evanko said the company is currently in talks with about 300 potential and existing hydrogen customers, compared to 30 in April of last year.

She noted the increase in demand for liquid hydrogen trailers, with 22 orders booked in the second quarter.

“The most trailers sold prior to now was nine in a year,” Evanko said on the call. “We’re tracking to over one per week this year.”

She expects the increase in demand for trailers to continue to grow throughout the decade as networks get built out.

“Instead of siloed projects happening, there’s now more of a network of production locations and end users,” she said. “So consider the hydrogen transports are kind of in the middle of the value chain and connecting the production locations to the end-use locations. So that’s really the market driver of that.”

Chart reported sales of $322 million in 2Q2021 compared with $289.5 million in the same period a year ago. Sales in its specialty products division, which includes hydrogen, CCUS and LNG vehicles, more than doubled year/year to $106.8 million from $48.6 million. The company also saw sales related to its repair, service and leasing division grow to $54.6 million in 2Q2021 from $40.1 million a year ago.