A major natural gas group has called on the Commodity Futures Trading Commission (CFTC) to clarify the “ambiguity” between the definitions of a swap dealer and major swap participant when crafting regulations to implement major financial regulatory reforms.

“We are committed to a liquid, well functioning market that protects natural gas consumers and encourages capital investment in the natural gas industry. Through the [Dodd-Frank] financial reform debate, we have emphasized that our companies primarily use derivatives to reduce commercial risk to the benefit of natural gas consumers,” said Jenny Fordham, vice president of markets for the Natural Gas Supply Association (NGSA).

“Consequently we urge the CFTC to adopt regulations that resolve the ambiguity around the terms ‘swap dealer’ and ‘major swap participant’ and protect physical market participants from increased costs that would divert capital from productive uses, particularly where the capital diversion would not further the goal of protecting consumers,” she said.

In addition, the NGSA recommended that the de minimis exclusion from the definition of swap dealer be based on the percentage of an entity’s swap transactions with customers relative to total swap transactions.

And the Commission must avoid establishing rigid classifications for the kinds of transactions and positions that qualify as bona fide hedges, the producer group said. It noted that the exemption must be applied by the CFTC using the forward-looking, situation-specific perspectives of individual swap participants.

For example, “consider a natural gas supplier hedging against predictions of a disruptive hurricane season in the Gulf of Mexico. In the event that the hurricane season is significantly less disruptive than predicted, the position the supplier took to hedge its perceived risk, as perceived at the time it entered into the subject transaction(s), should not be second-guessed in hindsight by the regulator as ‘speculation’ on hurricane activity. Such second-guessing would effectively undermine swap participants’ confidence in…the bona fide hedge exemption,” the NGSA said.

In a related development CFTC Chairman Gary Gensler and European Commissioner Michel Barnier met Tuesday to discuss many of the upcoming reforms to the over-the-counter (OTC) derivatives market, which includes comprehensive regulation of the multi-billion-dollar market for the very first time. Both Gensler and Barnier committed themselves to working across borders to achieve the goals set forth by G-20 leaders with respect to strengthening OTC derivatives regulation.

“I am confident that we will bring strong and consistent regulation to both the European and U.S. swaps markets,” Gensler said. “We have proven on OTC derivatives regulation that close transatlantic cooperation can work. It’s essential — across the board on all financial regulation — that the United States and Europe move in parallel [direction] and that we don’t create new space for regulatory arbitrage.” 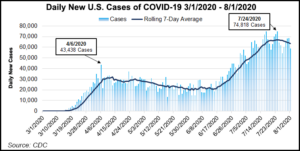