Centennial Resource Development Inc. and Colgate Energy Partners III LLC agreed to a roughly $7 billion merger of equals that would create what may be the largest pure-play exploration and production (E&P) company in the Permian Basin’s Delaware sub-basin. 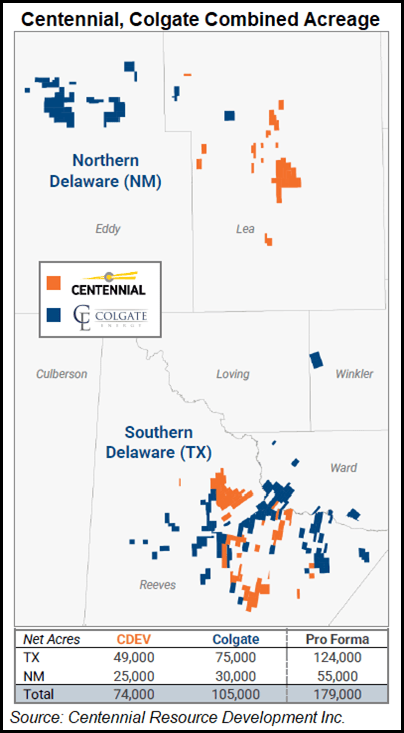 Once completed, the combined company would be headquartered in Midland, TX. It would have more than 15 years of drilling inventory, assuming the current drilling pace, the management teams said.

The transaction has been unanimously approved by each board, with closing expected before the end of the year. A new company name will be announced by the closing date, Centennial said.

Smith has been tapped to serve as executive chair, while Colgate’s co-CEOs Will Hickey and James Walter would jointly helm the combined company as well. Denver-based Centennial’s COO Matt Garrison and CFO George Glyphis are slated to remain in their current positions following the merger.

“Both companies have established strong financial and operational cultures, and we expect the combined company will be a top-tier, low-cost operator that is able to deliver better margins and shareholder returns,” said Hickey.

Walter said the merger “is compelling from a financial, operational and strategic standpoint, establishing a leading Permian Basin independent. We believe the pro forma company is positioned to maximize returns for our new investor base, with our combined management team bringing a track record of operational excellence and strategic value creation.

“Management’s significant ownership in the combined company should give investors confidence that long-term value creation will always be our top priority.”

In a recent earnings call, Smith said Centennial was targeting 10-15% oil and gas production growth in the Permian this year.

Energy analysts weighed in on the merger, including Enverus analyst Andrew Dittmar.

“The team at Colgate has worked hard to reach a scale that would allow the company to achieve a public listing,” through an initial public offering (IPO) or by “being an attractive strategic merger partner,” Dittmar said. “Continued challenging equity markets for new E&P IPOs makes the choice to merge with an existing public operator the obvious path to reaching public markets.”

Dittmar said of the “smaller” Permian E&Ps, “Centennial is by a considerable margin the most obvious fit given its pairing of acreage in the New Mexico and Texas sides of the Delaware matches Colgate’s asset base, its asset quality is comparable, and the size is favorable for a merger of equals.”

Wells Fargo analysts led by Joseph McKay said,  “We think this transaction is a sign of things to come…” With privately held Permian E&Ps increasing their activity this year, “there is more opportunity for industry participants to create a better value proposition via combinations as opposed to standalone entities.”

The Permian Delaware specifically is on track to hit record average production of 5.7 million boe/d in 2022, Rystad Energy analysts said Thursday. Total production in the Delaware is estimated to grow by about 990,000 boe/d this year, according to the consultancy.

Investments in the sub-basin are expected to surge more than 40% from 2021 levels to reach $15.7 billion this year, the Rystad analysts said. Privately held E&Ps more than doubled their collective rig counts in the Delaware to 73 from 30 between January 2021 and April 2022, they noted.