After declining by 20% this spring in part on the Covid-19 pandemic, Canadian oil and natural gas liquids production will only achieve partial recovery into the first half of 2021, according to the U.S. Energy Information Administration (EIA). 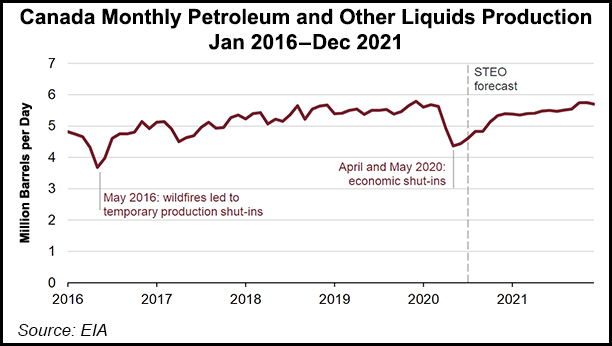 “Canada’s production will remain less than its 2019 average through the remaining months of 2020 and the first half of 2021 as lingering effects of lower global petroleum demand persist,” said researchers.

For the second half of 2020, EIA is forecasting a limited Canadian liquid fossil fuels production recovery to 5.1 million b/d from the low in May 4.4 million b/d, followed by full revival to the 2019 level next year.

The forecast recovery has begun in the top Canadian production source, Alberta. Producers report making a start by restoring deliveries of about 200,000 b/d from oilsands mining and underground extraction facilities.

Activity remains severely depressed on the conventional side of the Canadian industry that taps flowing wells. The number of drilling rigs working on oil targets hit a low of four in June, off 95% from 84 in June 2019, according to CER.

“This is the lowest number since at least 1998 when separate data for oil drilling and gas drilling first became available,” CER said. As of July 10, “there were six rigs drilling for oil in Canada…

“In June the number of rigs drilling for either oil or gas averaged 18 per day, the lowest number since at least 1964, when data for all Canadian drilling was first recorded.”

“In a normal year, the rig count will fall 85-90% from its peak in the winter to its minimum in April and May,” CER noted. To date this year, however, the total oil and gas rig count in Canada has fallen “by 98% from its height of 172 to only four active rigs and has not begun its usual summer increase.”