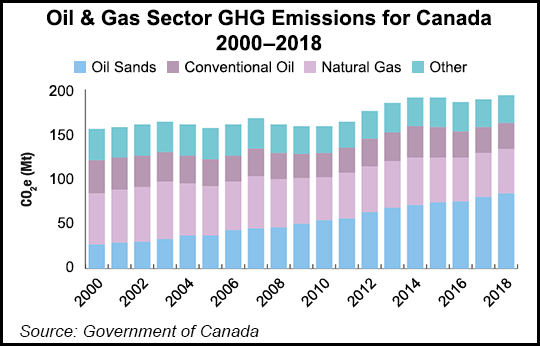 “Canada will continue to work closely with the United States and other countries to reach our ambitious climate goals,” added a statement by the prime minister’s Liberal administration in Ottawa.

While U.S. climate policies remain in planning and debating stages, Canadian counterparts adopted since the Liberals won office in 2015 are being put into practice.

An array of other Canadian climate policy initiatives have been announced, from buyer subsidies for electric cars and low-emission home improvements to tax cuts for clean energy hardware manufacturers and a national campaign to plant two billion trees.

The Trudeau government supports 960,000 b/d of expansions under construction by Trans Mountain Pipeline and Enbridge Inc.’s Line 3, and is campaigning to save the 540,000 b/d Enbridge Line 5 from closure as an environmental menace in Michigan.

Natural gas pipeline additions, aimed at increasing both exports and domestic deliveries, are also underway by Canadian and U.S. subsidiaries of TC Energy Corp. with approvals by the Canada Energy Regulator and the federal cabinet.

Liberal ministers participating in Biden’s climate change summit along with other global leaders did not dwell on the pipeline projects or Canada’s long-standing prominence as an international oil and gas supplier. Instead, emphasis was placed on next-generation energy prospects.