There is still too much “scientific uncertainty” surrounding hydraulic fracturing’s (fracking) impact on water supply, and because of this regulators and operators need to be more transparent and accountable, according to a University of California, Berkeley, report that was released last Thursday. 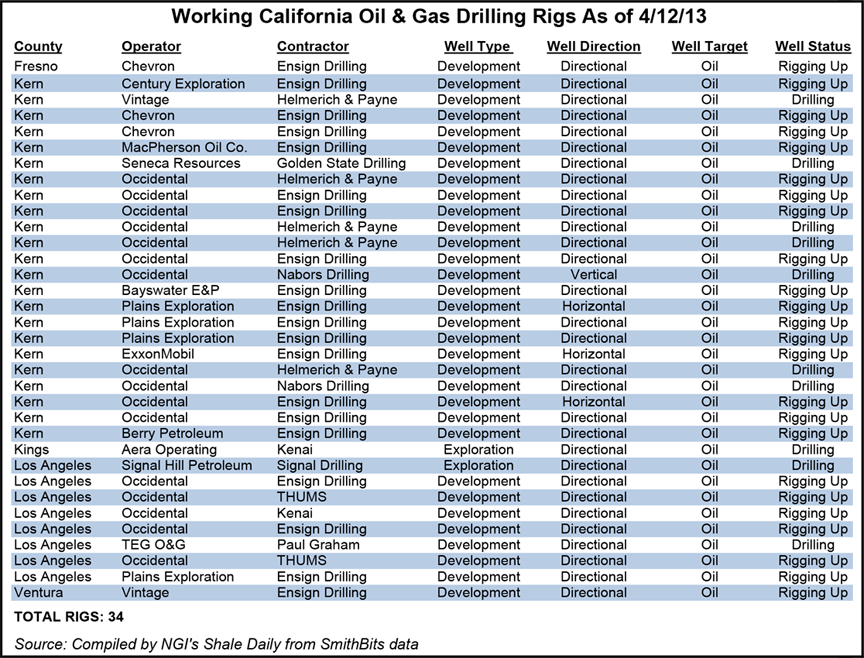 The authors from the campus law school’s Center for Law, Energy and the Environment said they specifically timed their work, “Regulation of Hydraulic Fracturing in California: A Wastewater and Water Quality Perspective,” to add to the discussion that kicked off last December by the state’s ongoing review process of preliminary draft fracking rules that will undergo more than a year-long development process.

The Department of Conservation’s Division of Oil, Gas, and Geothermal Resources (DOGGR) will be holding its fourth and fifth public workshops April 19 in Santa Barbara and April 30 in Monterey as part of a series to gain more public understanding and input on the proposed rules.

According to SmithBits data, there are currently 34 oil rigs in operation in the state of California, with a vast majority of them located in Kern County in the southwestern portion of the state. One rig is vertical drilling, three of the rigs are horizontal drilling, and the remaining 30 rigs are directional drilling.

Co-authored between the Berkeley center and the related Wheeler Institute, the report said the risks to water quality from fracking stem “primarily from improper storage and handling of fluids at the well site, including spills and improper lining of pits; injection of wastewater into disposal wells, which can trigger earthquakes; and potential for groundwater contamination due to failure of well integrity.”

Authors Jayni Foley Hein, executive director of the Berkeley center, and Michael Kiparsky, associate director for the Wheeler Institute for Water Law and Policy at Berkeley’s law school, conclude that nationally there are few of what they called “peer-reviewed scientific studies” on the potential water quality risks from fracking, and fewer still focused on California.

They are also concerned about the prospects for greatly increased use of hydraulic fracturing in California, something so far that has been slow to develop although the practice in some form has been used for decades in the hydrocarbon-rich state.

DOGGR officials have said in advance of the workshops that the preliminary draft rules, which are on the state agency’s website (https://www.conservation.ca.gov/dog), are supposed “to provide regulators and the public with disclosure of hydraulic fracturing details (this is when and where it is used), to protect public health, and to give the oil/gas industry a clear set of standards for which it will be held accountable when using [fracking].”

Nevertheless, the Berkeley report cited a “stark lack of clarity” among regulators and the public regarding fracking in California,.and specifically how they contend the risks vary from other states.

The report has comments and recommendations on everything from well casings, well abandonment, seismic risk and water reuse, treatment, storage and handling, but it also focuses on what it called the “knowledge gaps and need for more research” to address the scientific uncertainty findings. These include:

In focusing on wastewater and general impacts on water quality, the report recommends what it called “better tracking and handling of fracking wastewater to protect against potential water impacts.”

It wants more extensive recordkeeping and reporting on fracking wastewater disposal. One safeguard might be the required use of what the report called “unique chemical tracers” placed into fracking fluid to aid in identifying potential contamination events and assessing liability.

Another proposal is for clear information on how produced water from fracking may be safely reused or recycled to reduce pressure on California’s water supply. The authors would also prohibit the discharge of fracking wastewater to publicly owned treatment facilities at least until the U.S. Environmental Protection Agency issues pretreatment guidelines.