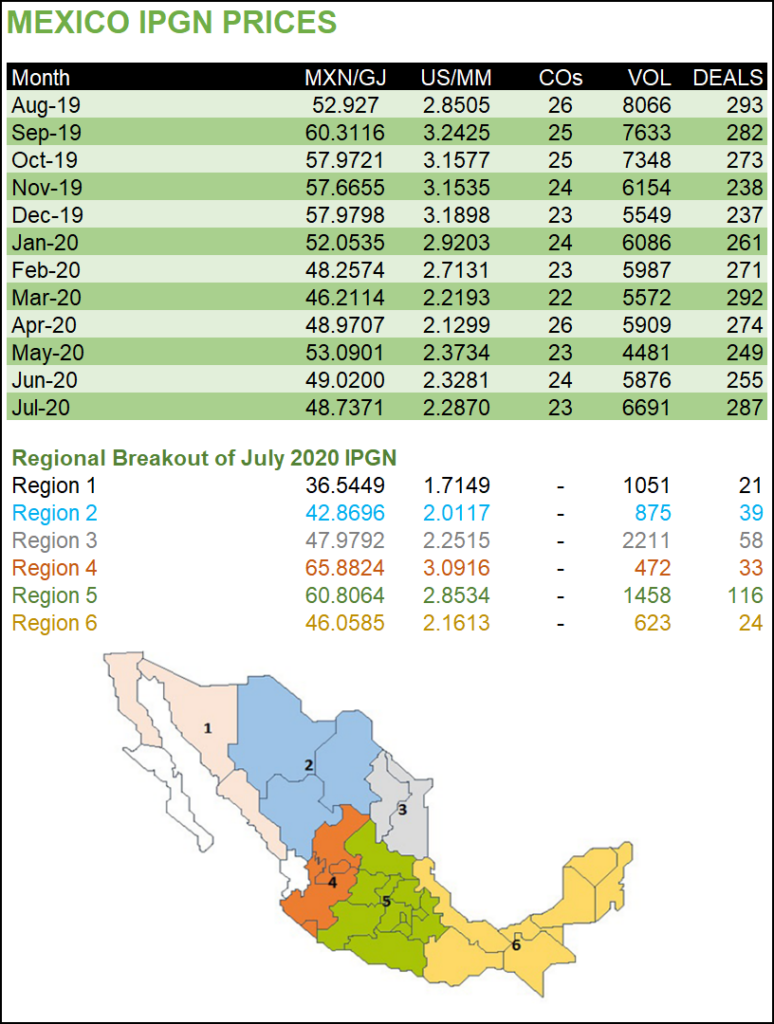 Pipeline natural gas exports from the United States to Mexico are exceeding 6 Bcf/d so far in August, according to preliminary estimates by Genscape, Inc.

This is up from the 5.3 Bcf/d average reported by the U.S. Department of Energy for the first quarter of 2020.

While exports from West Texas and South Texas are showing relatively flat average flows this month versus July due to seasonal effects, exports from California and Arizona have jumped by 12% and 6% respectively during the same period, Genscape analyst Ricardo Falcón told NGI’s Mexico GPI.

Exports from West Texas to Mexico are expected to continue rising, now that the final leg of Fermaca’s Waha-to-Guadalajara pipeline is complete.

However, the electronic bulletin board for the final section, known as Villa de Reyes-Aguascalientes-Guadalajara (VAG), still is not showing nominations.

“Wahalajara’s main contribution to overall U.S.-Mexico exports continues to come from its upper leg, Tarahumara,” said Falcón. “At the aggregate level, August-to-date average flows through Wahalajara are slightly weaker than in July, but still stronger than in the preceding months due to both seasonal and [non-seasonal] factors.”

Due to Mexico’s dependence on gas imports from the U.S., a majority of natural gas contracts in Mexico are linked to liquid U.S.  pricing locations with connectivity to the border, namely Waha, Henry Hub and Houston Ship Channel.

The Waha basis differential to Henry Hub strengthened to minus 15.6 cents in late June, a level not seen since December 2016, but has since plunged back to near minus $1.

The rally was driven primarily by shut-in crude oil production in the Permian Basin in the wake of Covid-19 and a subsequent reduction in associated gas output, combined with increased gas shipments to Mexico, said NGI’s Patrick Rau, director of strategy and research.

“The move back to $1 is on the heels of a return to $40-plus crude oil prices, and the resumption of the Covid-19 related shut-in production,” he added.

Rau said the behavior of Waha basis over the coming weeks and months will depend “on just how quickly Permian producers can fight off decline rates, or whether they even want to.”

He cited that the Permian rig count is down about 70% since the end of February, and that first-year decline rates in the basin typically range from 30-40%.

“The lack of drilling is having an impact on production, as current Permian production is down from 4.9 million b/d earlier this year to around 4.1 million b/d today,” Rau said.

Natural gas marketers in Mexico reported an average price of $2.29/MMBtu in July, down from $2.33 in June and $2.62 in July 2019, according to the latest IPGN monthly natural gas price index compiled by the Comisión Reguladora de Energía (CRE).

CRE used 287 transactions from 23 companies for a total volume of 6.69 Bcf/d to calculate the latest index composed of day-ahead spot sales reported by marketers to CRE.

The volume was the highest recorded since October 2019.

The IPGN breaks Mexico down into six geographical regions. Transacted volumes in region 1, which covers the northwestern states of Baja California, Sonora and Sinaloa, averaged 1.05 Bcf/d, an all-time high, up 14.3% year/year.

Sempra Energy management said this month they are confident the Energía Costa Azul liquefied natural gas export project near Ensenada in Baja California will go ahead, which would provide an additional outlet for U.S. gas production.