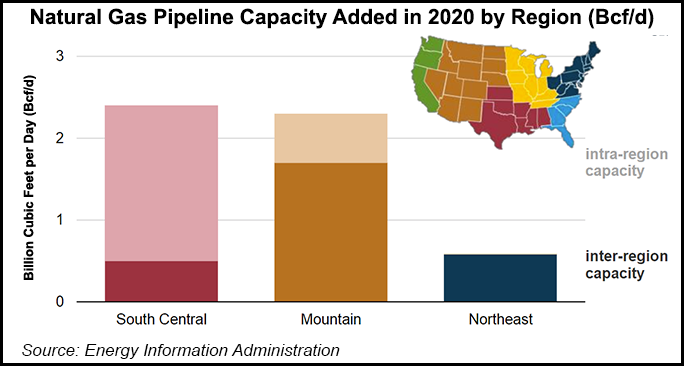 The Covid-19 pandemic may have dampened energy demand and dented production activity in 2020, but it hasn’t deterred midstream infrastructure buildout in the natural gas industry, an analysis from the Energy Information Administration (EIA) shows.

Roughly 5 Bcf/d of natural gas pipeline capacity has entered service so far in 2020, with the new capacity located primarily in the Rockies, the Midcontinent and in the Permian Basin, according to research published Monday by the EIA.

Natural gas pipeline projects that have entered service so far in 2020 include Tallgrass Energy LP’s Cheyenne Connector Pipeline and Cheyenne Hub Enhancement Project. The 70-mile, 36-inch diameter Cheyenne Connector, combined with the hub enhancement, adds 1.6 Bcf/d of capacity to allow increased volumes from the Cheyenne hub near the Colorado-Wyoming border to flow east on the 1,700-mile Rockies Express Pipeline. The projects entered service in June.

Also entering service this year, Cheniere Energy Inc.’s Midship Pipeline started up in April, adding 1.1 Bcf/d of capacity to carry gas from the SCOOP (aka the South Central Oklahoma Oil Province) and the STACK (Sooner Trend of the Anadarko Basin, mostly in Canadian and Kingfisher counties) plays in western Oklahoma to the Bennington hub at the Texas-Oklahoma border. The Midship project is designed to increase deliverability of Midcontinent gas supplies to serve liquefied natural gas export demand.

Meanwhile, a slew of interconnects in the Waha hub in West Texas have started up so far in 2020, EIA noted. These include:

Incremental buildout in the Southeast, on the Sabal Trail Pipeline (0.17 Bcf/d) and on the Hillabee Expansion (0.2 Bcf/d) of the Transcontinental Gas Pipe Line, and in the Northeast, on the Empire North Expansion Project in western New York, accounts for the remainder of the new 2020 capacity, according to EIA’s breakdown.

Despite the growth in 2020, the outlook has not been entirely bullish for the natural gas midstream sector. The 5.0 Bcf/d of new capacity comes with the counterweight of an estimated 8.7 Bcf/d of canceled projects in 2020, according to EIA.