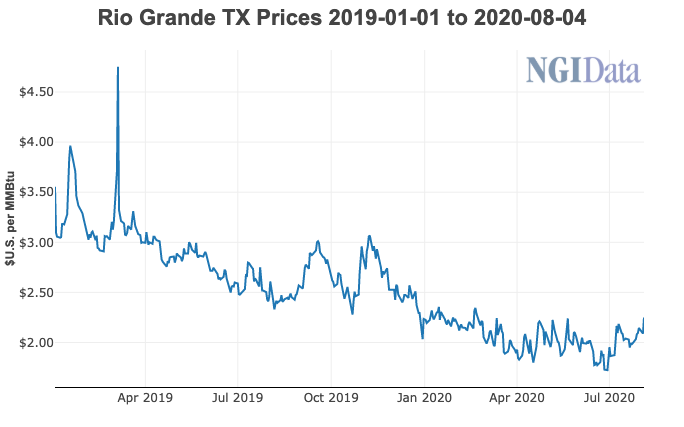 Pipeline natural gas exports from the United States to Mexico averaged 5.3 Bcf/d during the first quarter, up from 4.8 Bcf/d in the year-ago period, according to the U.S. Department of Energy’s (DOE) latest quarterly report on the gas trade balance.

Mexico accounted for 64.6% of total pipeline gas exports, with the other 35.4% going to Canada.

Exports by pipeline accounted for 50.7% of total gas exports, with the remaining 49.3% leaving in the form of liquefied natural gas (LNG).

Prices of U.S. pipeline exports to Mexico and Canada rose by 8.6% and 8.9%, respectively, versus the fourth quarter.

Although DOE listed 20 exit points for U.S. gas exports to Mexico, just two of those points — Rio Grande City, TX, and Brownsville, TX, — accounted for 46.2% of the total.

Flows from West Texas to Mexico are expected to continue growing as well, following the recent completion of Fermaca’s Waha-to-Guadalajara pipeline system.

Both sides lost ground in the natural gas trade between Canada and the United States as emergency responses to the Covid-19 pandemic eroded economies during the first quarter of this year, according to DOE.

The average price fetched at the border by Canadian deliveries to the United States fell year/year by 32.7% to $2.37/MMBtu from $3.52/MMBtu.

The Canadian setbacks were nearly twice as severe as the contraction endured by U.S. exporters on their northbound cross-border gas flows.

Meanwhile, growth by U.S. exports to Mexico and overseas shipments of liquefied natural gas (LNG) before the pandemic more than made up for the contraction in the trade with Canada.

Overseas LNG exports to 32 countries continued to be the U.S. gas industry’s growth star, with South Korea the top customer followed by the UK and Japan in third place.

The highest 1Q2020 price paid for U.S. LNG, $10.00, went to the smallest cargos, carried as container loads on freighters instead of via dedicated tankers to Haiti, Bahama Islands, Barbados and Jamaica.

LNG shipments in the first three months of 2020 nearly caught up to pipeline flows as the top method of U.S. gas exports by accounting for 49.3% of deliveries, the DOE said.