A surprise increase in natural gas prices could allow Cabot Oil & Gas Corp. to deploy a sixth drilling rig in the Marcellus Shale by the fall, helping the company accelerate its plans for pad drilling and move more primary term acreage into production. 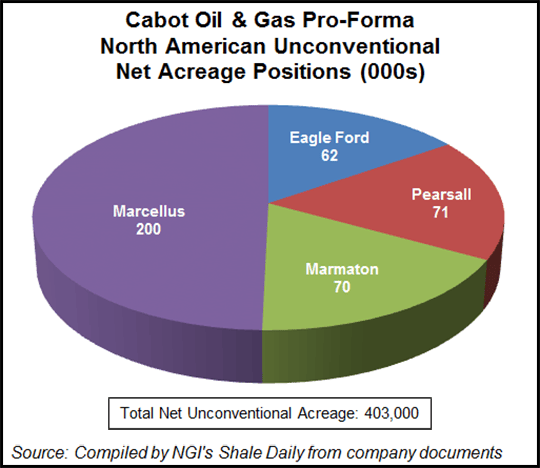 During a conference call to discuss 1Q2013 with industry analysts, CEO Dan Dinges also hinted that Cabot could sell its assets in the Marmaton Shale in the panhandles of Texas and Oklahoma, but he said the Houston-based company wasn’t currently active in trying to sell them.

“We’re making progress on a number of fronts,” Dinges said Thursday. “The Marcellus continues to deliver outstanding results, and efficiency enhancements are just around the corner as we continue our planning for full pad development. The Marmaton cost reductions and well results are materially better, and work and progress in the Pearsall [Shale] continues with more efficient drilling on the horizon.”

Dinges said that in late March, Cabot hit a record 24-hour gross production rate in the Marcellus of 1.054 Bcf/d, turning in-line 17 horizontal wells. He conceded that most of the wells turned in-line had offset some of the company’s existing production due to field pressure constraints, but relief would come when the Central Compressor Station comes online in late June.

Dinges said Cabot’s completion rate in the Marcellus was 70% higher than 1Q2012 and 23% above 4Q2012. He added that the company currently had 429 stages completing or cleaning up, and another 279 stages waiting to be completed.

“We have all been blessed with an uptick in the natural gas price,” Dinges said during the Q&A session. “Toward the end of 2012, we explored having a second completion crew in the field for a short period of time, just to take care of some spread out wells that we had on a ‘waiting on completion’ status. We have maintained that completion crew working for us, and that was one of the catalysts that increased the number of stages that we were able to deliver. We’re looking at how we keep that extra completion crew as an option.

“We have also had ongoing discussions to determine when we might want to bring a sixth rig into the field to start drilling off a given pad. It does not necessarily move extensive pure pad drilling up in the queue. [But] it moves it up, in theory because the sixth rig would be capturing primary term acreage sooner, which would allow us to start pad drilling sooner.”

Dinges said Cabot would probably have a backlog of 500 to 750 stages in the Marcellus by the end of the year, about the same as it had at the beginning of 2013.

In the Pearsall Shale, Dinges said the company had three drilling rigs deployed after moving one back to the Eagle Ford Shale and another to the Marmaton. He said the Cabot and its joint venture (JV) partner in the Pearsall, a U.S. unit of Osaka Gas Co. Ltd., had decided to maintain their plans to drill 15 gross horizontal wells in 2013 (see Shale Daily, June 25, 2012).

“The Pearsall is still a young play and remains a science project for us, much like the Marmaton in the early days,” Dinges said. “We have a thick column of hydrocarbon and continue to work on all aspects of drilling and completing a cost effective well. The wells are productive, but when you look at the [production] rates and compare them to the costs, so far it makes it economically challenging when you compare that to our investment alternatives.”

Dinges said the company was currently drilling three wells in the Pearsall, three were either completing or waiting on completion, and nine wells were in production. He said the 30-day average production — for the six wells that have produced for 30 days or more — is more than 600 boe/d, with an average 50% weighted toward oil.

The CEO said there wasn’t much to report in the Eagle Ford, other than to date the company has 43 wells producing in the Buckhorn area, with three wells awaiting completion and one well currently being drilled.

“While we’ve had limited activity due to the Pearsall effort, our last four wells produced at an average 24-hour rate of more than 650 boe/d, with an oil cut of approximately 90%,” Dinges said. “During the quarter, we drilled our longest lateral to date in the Eagle Ford, at 8,200 feet, with 30 stages. It’s still in early stages of flowback, however it is already providing oil rates above the field rate IP [initial production]. It’s good data but still very early.”

Dinges said Cabot completed five wells in the Marmaton, with an average of 21 stages per well. “We keep gaining efficiencies there,” he said. “These wells average an IP rate of more than 800 boe/d.”

Dinges said Cabot was not actively marketing its Marmaton assets, “but if a transaction were to be had, we would certainly look at the Marmaton as an area that we would consider and utilize those dollars to enhance some of the other areas of our operation.

“Again, let me emphasize we are not actively marketing the Marmaton, but the fact that those wells are 90% oil and cost $3 million to $4 million, depending on the lateral lengths and the number of stages, is being under-appreciated. They’re delivering a very good rate of returns.”