The oilfield services (OFS) sector was under pressure before the oil price war was launched and Covid-19 became a pandemic, but the future of many companies appears to hang on a thin thread, battered by the outbreak and plunging oil market. One analyst predicted up to one million jobs could be lost, mostly in the onshore sector. 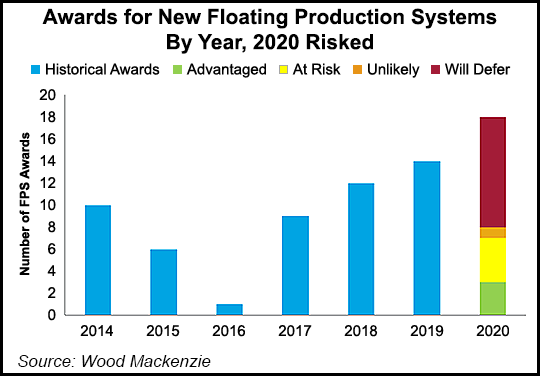 Bellwether Schlumberger Ltd. on Tuesday cut capital spending by 30% from 2019 levels, another brick in the wall as the bellwether of the global OFS sector adjusts to the new normal. Halliburton Co., the No. 1 hydraulic fracturing (fracking) operator in North America, also signaled plans to sharply cut capex and lay off personnel. Earlier this month it furloughed 3,500 people at its Houston campus.

“The industry is facing an unprecedented dual impact on the demand and supply side that none of us have witnessed over our professional lifetimes,” Halliburton CFO Lance Loeffler said Tuesday during a webcast.

Meanwhile, FTS International Inc. (FTSI), which does completions work across the Lower 48, has furloughed crews and support staff that no longer have scheduled work. Executive salaries have been cut by 25% on top of a 15% reduction already in place this year. And stage bonuses and travel time pay for crews have been cut, while bonuses have been suspended for some staff.

Rystad Energy predicted on Wednesday more than one million OFS jobs could be cut this year as projects are deferred and delayed, with onshore services bearing the brunt. An estimated five million people are employed globally in the OFS sector, and contractors are predicted to scale down by at least 21%.

“Low oil prices are likely to persist in 2021 and could lead to further workforce reductions. But as we move into the second half of 2021, with better market fundamentals and a fading Covid-19, recruitment is likely to pick up in the shale sector and from 2022 will also kick-off in the offshore sector,” said Rystad’s Audun Martinsen, head of Oilfield Service Research.

Evercore ISI late Tuesday indicated Lower 48 drilling permits for the week ended March 13 fell by 11% week/week to 424, the second lowest weekly count to date for the year. The most recent Baker Hughes Co. rig count posted a 20-rig decline, the largest weekly decline to date in 2020, with the U.S. land rig count ending at 753, its lowest level since March 2017.

“We have heard in the field that operators have told drilling contractors once they reach total depth on the current well they are drilling, the rig will then be released,” Evercore analyst James West said.

Energy analysts said the OFS sector likely has never faced such severe conditions as today, as it works in tune with the exploration and production (E&P) customers, which have been cutting capex sharply since early this month in reaction to world events.

“This downturn is likely to be unprecedented in its rapid E&P customer reaction time,” West said. “We originally envisioned a 30% drop in North American E&P spending in 2020 compared to 2019; however, our Budget Barometer is tracking closer to 38%.

“Completions activity is still anticipated to be cut 50%. This will ultimately lead to production declines; however, this will take a few quarters to play out.”

The “Four Too’s” have arrived, West said, with “too many assets, firms, management teams and too much debt…coming home to roost for many in the oil patch…Over this next decade, there is well over $60 billion in debt currently trading at distressed levels that is coming due across both E&P and OFS. Unfortunately for the latter, nearly 75% of that is borrowed by E&P customers.”

Evercore is expecting a “crescendo of defaults” beginning this year that should force the upstream sector to consolidate, in turn prompting supply-chain savings and capex reductions.

Evercore estimates at least $18 billion of capital has been “sucked out of E&P upstream project plans for 2020, which equates to a 30% drop versus prior budgets and a nearly 35% year/year decrease compared to 2019.”

What that means for the OFS providers is that the “addressable market” for work is shrinking. E&Ps, according to Evercore’s team, “expect for OFS companies to bear the brunt of these reductions all while expecting for efficiencies to continue relatively unchanged.”

Channel checks by Evercore analysts point to pricing concessions of up to 30%.

In a review of the OFS sector led by Raymond James & Associates Inc.’s Praveen Narra, the narrative is simple: “get ready for massive activity reductions” as “there is very little to be optimistic about” regarding Lower 48 activity in the near term.

“We believe oilfield activity is set to decline much faster than in previous cycles due to the nearly complete starvation of capital in energy as well as a far more cash flow-focused business model that E&Ps employ,” Narra said.

“Frack activity will be the most badly hit in the near term, and drilling will likely take several quarters to bottom. Rig activity will likely decline at the fastest practicable levels. This will be an extraordinarily difficult period if the strip futures price is correct.”

U.S. OFS activity is set to collapse if oil prices remain well below $30/bbl West Texas Intermediate (WTI), Narra said. With E&Ps drastically cutting to survive, “total U.S. capex is likely to fall in excess of 65% with a WTI price persisting in the $20s.”

OFS activities are expected to retreat “at a never-before-seen pace, and we believe the U.S. oil service market has become a test of survivability, not profitability…We believe OFS companies and investors need to prepare themselves for activity to fall at an unprecedented rate.”

Raymond James is forecasting U.S. rig activity will decline to 400 rigs based on a $33/bbl 2020 scenario, bottoming in the last six months, with a slight increase in 2021 from natural gas and the contango in oil prices.

“Keep in mind the intentional DUC builds will be generated by the better capitalized operators who largely have rigs contracted,” Narra said.

Coming into 2020, the OFS sector already was struggling with low margins, oversupply and weak investor sentiment, Wood Mackenzie analysts noted. “Any optimism regarding an uptick in 2020 has been unequivocally crushed.”

Principal analyst Mhairidh Evans of Wood Mackenzie’s upstream supply chain research team said, “Even more capital discipline from operators will reduce demand significantly in 2020. Whether offshore or in the Lower 48, only a handful of major projects are expected to move forward this year.”

The unsanctioned greenfield projects “stand out as the first to fall,” which would impact the supply chain.

“We had forecast growth in the floating production systems (FPS) market for 2020 with up to 18 new contract awards,” she said. “Now we expect only a handful to go ahead, which would take the FPS market to 2015/16 levels.

“Our preliminary analysis suggests global upstream capital investment will fall by at least 25% in 2020. Most of that impact will be through activity reduction, although OFS pricing deflation will play a role.”

Lower 48 players already are making “major pricing concessions,” Evans noted. “Some pressure pumpers have reduced prices by as much as 20%, while rig rates have dropped by about 15%.”