British Columbia (BC) is poised to overtake Alberta and become the top source of Canadian natural gas as of 2028, the Canada Energy Regulator (CER) said in its latest annual industry review. 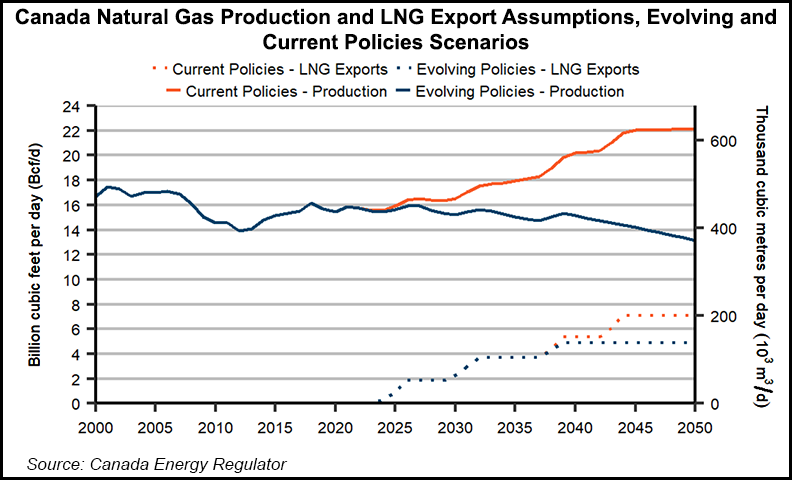 The liquids-rich Montney Shale deposit, which fuels all drilling in BC and extends east into Alberta, could account for three-quarters of Canadian gas production by 2050, according to the “Canada’s Energy Future 2021” report.

Under current policies, total Canadian gas production would grow to 22.2 Bcf/d in 2050.

The evolving conditions outlook projects national gas output hovering at its existing 15.5 Bcf/d total for the next two decades.

Both CER scenarios rate oil as capable of remaining a mainstay of Canada’s energy trade. Alberta would continue to be the country’s top supplier, with at least four-fifths of production continuing to be exported to the United States and, increasingly, overseas.

Under current policies, Canadian oil output would grow 34% from 5 million b/d in 2021 to 6.7 million b/d in 2040. It would remain at the higher level, potentially fueling new pipeline proposals and accelerated railway deliveries.

In the evolving conditions outlook Canadian oil production would climb to 5.8 million b/d in the early 2030s but slide back to 4.8 million b/d by 2050, representing a modest long-range setback to 4% below the 2021 total.

“This largely stems from the nature of the oil sands facilities, which are long-lived and have low operating costs once built. Throughout the projection period, the vast majority of oil sands production is from facilities that are producing today.”

The agency stressed that its oil and gas scenarios — plus six more devised for electricity possibilities — are only “a baseline for discussing Canada’s energy future today and do not represent the CER’s predictions of what will take place in the future.”

The CER urged extra caution about interpreting an emerging global greenhouse gas reduction goal. “Net-zero” remains an accounting ideal that has yet to be defined clearly or translated into requirements by countries that have adopted it, including Canada.

“Over the past several years, there has been an increasing body of scenario analysis on what net-zero by 2050 means for the global energy system,” noted CER.

Expect surprises, added CER. The regulator said that, over the projection period to 2050, “it is likely that developments beyond normal expectations, such as geopolitical events or technological breakthroughs, will occur. Also, new information will become available, and trends, policies, and technologies will continue to evolve.”