Growth in Montney Shale natural gas production is fueling a C$350 million ($280 million) proposal for a natural gas liquids (NGL) pipeline from the northeastern British Columbia (BC) industry hotspot to a processing and trading location in Alberta. 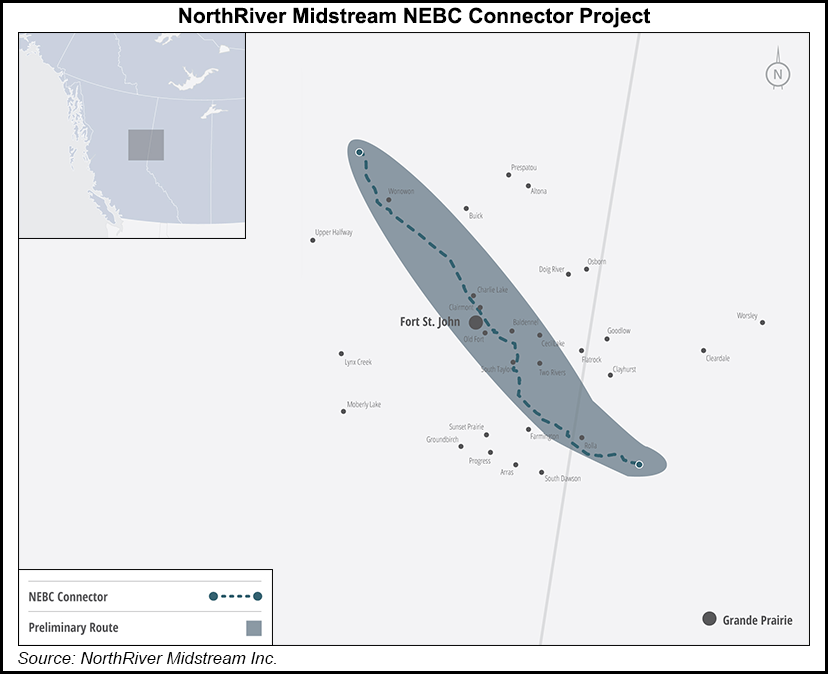 NorthRiver Midstream NEBC Connector GP Inc. set a completion target of late 2024 for the conduit in an application to the Canada Energy Regulator (CER). The proposed 215-kilometer (130-mile) system would have dual pipes.

“The project is critical to the continued development of the Montney play in the Western Canadian Sedimentary Basin,” stated NorthRiver, a subsidiary of Toronto-based Brookfield Infrastructure LP.

“A customer-driven solution, the primary purpose of the project is to improve market access for existing and anticipated growth volumes.”

The NEBC connector would have total capacity of 98,000 b/d in its two pipes. One system would transport condensate, and the other pipe would move a blend of NGLs, including propane and butane.

Liquids-rich Montney gas production has overtaken space on the only byproducts conduit now serving the region, which is operated by Pembina Pipeline Corp. That’s according to a report for NorthRiver by Texas-based consulting firm Muse, Stancil & Co.

As development accelerates to fill liquefied natural gas export facilities now under construction or proposed, Montney NGL byproducts are forecast to grow by 66% in 2030 to 278,000 b/d from the current output of 169,000 b/d.

Growth is also expected to continue through the mid-century. Montney well flows by 2050 are forecast to double to 10.6 Bcf/d, including 370,000 b/d of liquids byproducts.

NorthRiver acknowledged that the Montney outlook is uncertain because of negotiations by the BC government and Blueberry First Nation following an October court order requiring an enhanced native role in projects.

However, the industry has indicated negotiations to date are encouraging. Most projects approved before the October ruling are allowed to proceed. Blueberry accepted C$65 million ($52 million) in compensation. Tribal leaders described development participation as the Blueberry goal, not obstruction.

The CER rejected a demand for Blueberry to stop consideration of the new BC pipeline proposal until the negotiations conclude. NorthRiver reported holding consultations with Blueberry, and it noted that the court verdict only addressed the provincial regulatory structure, and not the CER as a federal agency.