After rising $3/bbl in March on demand optimism, Brent crude oil prices are set to average $65.00 in the second quarter of 2021, according to updated projections from the U.S. Energy Information Administration (EIA). 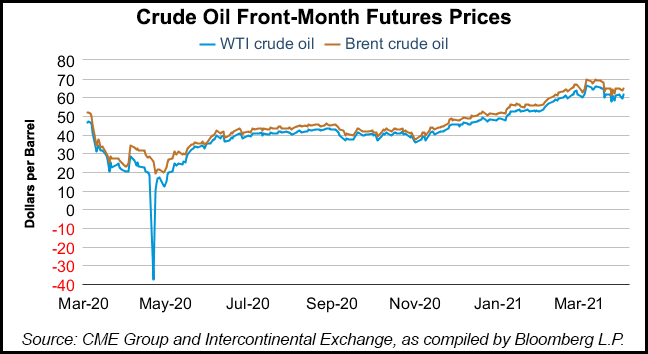 Brent rose to $65.00 in March amid expectations for oil demand to grow on higher Covid-19 vaccination rates and increased global economic activity, EIA said in the April 2021 edition of its Short-Term Energy Outlook (STEO), published Tuesday. The strengthening crude prices also reflected ongoing production limits from the Organization of the Petroleum Exporting Countries and its allies (aka OPEC-plus), the agency said.

The most recent data from EIA shows domestic crude oil production averaging 11.1 million b/d in January 2021, with output declining an estimated 0.8 million b/d in February amid the cold temperatures that ensnarled the Texas energy system that month.

OPEC crude oil production is set to rise from an average 25.1 million b/d in 1Q2021 to 25.8 million b/d in the second quarter following an April 1 announcement from the cartel that it would begin raising production targets in May, according to the agency.

“The increase also reflects Saudi Arabia unwinding voluntary cuts of 1.0 million b/d between May and July,” EIA said. The agency expects OPEC production to approach 27.9 million b/d in the second half of 2021.

EIA said it expects increases in global supply to “contribute to a mostly balanced market during the second half of 2021. However, the forecast depends heavily on future production decisions by OPEC-plus, the responsiveness of U.S. tight oil production to oil prices and the pace of oil demand growth, among other factors.”

Henry Hub natural gas spot prices are set to average $2.73/MMBtu during 2Q2021 and should average $3.04 for the year, a dramatic increase over 2020 prices, according to EIA.

Spot prices at the national benchmark averaged $2.62 in March, EIA said. That’s down sharply from February prices, when a bout of extreme cold temperatures and associated market disruptions led to an average spot price of $5.35.

“We expect that continued growth in liquefied natural gas (LNG) exports, with only a slight corresponding increase in dry natural gas production, will contribute to the average Henry Hub spot price rising to $3.11/MMBtu in 2022,” EIA said.

The latest STEO predicts average U.S. production of 91.4 Bcf/d for 2021, roughly in line with the 2020 average. The agency’s forecast has dry natural gas production declining to a low of 90.8 Bcf/d in May “before steadily increasing through most of the remainder of 2021.” Output is expected to reach a high of 92.4 Bcf/d by November of this year, according to EIA.

A combination of rising production and lower consumption in the power sector compared to the previous two summers should see injections outpace the five-year average in 2021, EIA said. The agency expects inventories to end October 2021 at 3.7 Tcf, in line with the five-year average.

Residential/commercial consumption is set to rise 1.1 Bcf/d from 2020 levels, with industrial consumption on track for a 1.4 Bcf/d year/year increase.

“Rising consumption outside of the power sector results from expanding economic activity and colder temperatures in 2021 compared with 2020,” researchers said. “We expect U.S. natural gas consumption will average 82.1 Bcf/d in 2022.”