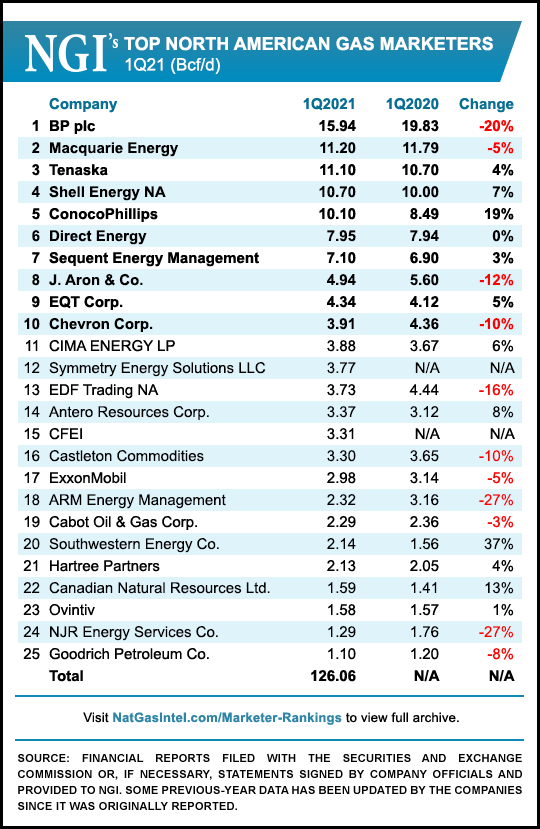 It marked the seventh year/year decline over the last eight quarters, according to NGI’s Top North American Natural Gas Marketers rankings. The flat result posted for 3Q2020 proved an exception.

The uncertainty created by the coronavirus weighed on marketer efforts early this year, extending the long shadow of a pandemic that hindered activity through most of 2020. Prior to virus outbreaks, in 2019, overall volume declines were largely the result of lower natural gas prices that limited some participants’ desire to sell gas.

“There’s just no way around the fact that this pandemic created a lot of issues across energy, and companies have needed time to recover,” Samco Capital Markets’ Jacob Thompson, a managing director, told NGI.

Still, Thompson said successful vaccination campaigns are freeing pent-up economic activity that is already bolstering the energy sector – including natural gas – and should continue to do so through the remainder of this year. That means beginning with the 2Q2021 marketer ranking, year/year results likely will reflect a post-pandemic recovery and overall volumes could shift positive.

Already, there are key signs of momentum. While BP and a few other major players dragged down the average, 12 of the 23 companies for which year-earlier data was available posted gains in the first quarter.

The biggest year/year gainers on a percentage basis were ConocoPhillips (up 19%) and Southwestern Energy Co. (up 37%.)

However, Hunzeker told NGI that conditions ripened this spring for continued strong natural gas demand and prices. He noted that demand for U.S. exports is robust – from both Europe and Asia – and domestic forecasts for a hot summer point to solid cooling demand in the months ahead.

The July Nymex futures contract this week has held comfortably above $3.00/MMBtu.

“We’re seeing a lot of power burn demand even at $3.00 prices,” Hunzeker said. “We see gas as the go-to fuel and we see that over the long haul.”

Importantly, Williams will almost certainly join the top marketers list with the second quarter rankings. The company in May announced the $50 million purchase of Southern Company’s natural gas energy trading unit Sequent Energy Management. Sequent ranked No. 7 on the 1Q2021 list with 7.10 Bcf/d, up 3% year/year. Williams said in a quarterly regulatory filing that it expects the combined volumes of Sequent and its own existing natural gas marketing business will exceed 8 Bcf/d.

Southern executives said recently Sequent had a strong first quarter, generating net income of more than $100 million because of robust sales amid Uri.

Williams CEO Alan Armstrong said during a conference call with analysts in May that the Sequent acquisition provided the capability to connect with more people and the opportunity to better source and deliver natural gas.

“We don’t really have all those contacts with people,” Armstrong said. “We talk to customers about long-term capacity on a regular basis. We’re not out regularly talking to them about how we manage the volatility in the business,” Armstrong said. “This really gives us a great opportunity to do that and look forward.”

The deal comes together as forecasts point to strengthening conditions.

The U.S. Energy Information Administration (EIA) said this month domestic natural gas consumption is set to average 82.9 Bcf/d in 2021, 0.5% below 2020 levels due to price-driven gas-to-coal switching in the electric sector. Meanwhile, residential/commercial consumption is projected to increase by 1.2 Bcf/d over 2020 levels, and industrial consumption should increase 0.7 Bcf/d year/year.

The stepped up output could support increased sales – domestically and internationally.

A big source of hope for U.S. natural gas marketers coming out of the pandemic is demand for exports of liquefied natural gas (LNG).

LNG volumes hovered above 11 Bcf/d and near record levels most of the spring. Export levels proved choppy in recent weeks amid annual maintenance work at LNG facilities. Still, analysts expect volumes to climb back up this summer and approach 12 Bcf/d – a new record – at the peak of the season.

Demand is steady because European gas storage was depleted during a freezing winter and an unusually cool spring, and a strong economic rebound in China and other parts of Asia is also fueling energy needs across that region. U.S. LNG is expected to be in high demand across both Europe and Asia this summer and into the fall.

Economic growth in North America along with expectations for another hot summer – following several near-record years of heat over the past decade – should also fuel a solid stretch of cooling demand in the United States and neighboring Mexico. U.S. pipeline exports to Mexico have approached record levels at times this year – often near 7 Bcf/d.

All of this combined should support strong prices above the $3.00 level this summer and give marketers reason to pursue sales, observers say. “As the economy heats up, so will energy needs,” trader Mike Matousek of U.S. Global Investors Inc. told NGI.

He anticipates greater commercial and industrial activity in the second half of the year, and this could result in further increases in demand for natural gas to cool businesses and fuel power plants.

“It’s difficult to get a long-term gauge on where fossil fuels are headed because of the hype around wind, solar and so on,” Matousek said. “But the rest of 2021 is looking pretty bright.”