The year started as 2019 had ended for leading natural gas marketers, with 1Q2020 continuing the sales declines that have hampered the industry for four consecutive quarters, according to NGI’s Top North American Natural Gas Marketers rankings. 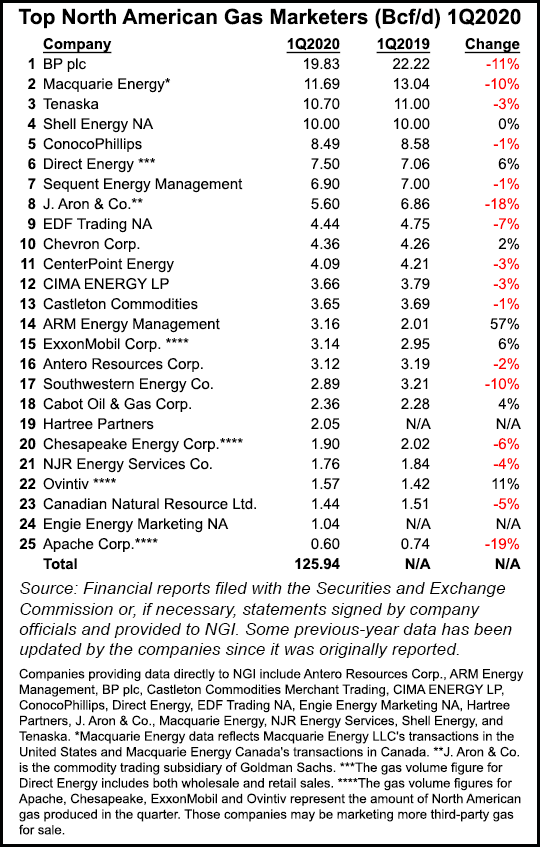 It was the fourth consecutive quarterly NGI survey to report year/year declines. Prior to decreases reported in the 2Q2019 survey, marketers had reported year/year increases in six consecutive surveys. The NGI survey ranks marketers on sales transactions only. The Federal Energy Regulatory Commission Form 552 tallies both purchases and sales.

London-based BP, for years the top gas marketer in North America, in February set ambitious targets to become a net zero carbon emitter by at least 2050. Last year, BP’s shareholders voted overwhelmingly to approve a resolution aligning the business strategy with the 2015 United Nations climate change accord, aka the Paris Agreement.

Direct Energy (7.50 Bcf/d) bucked the downward trend, reporting a 6% increase compared with 1Q2019, enough to bump it up one spot to No. 6 in the NGI survey.

With Covid-19 mitigation efforts only recently beginning to be relaxed and the Atlantic hurricane season off to a roaring start, 2Q2020 might not provide marketers with any better opportunities than 1Q2020.

“Drilling and production have been pulling off at a historic pace and this could continue into the second quarter, although the recent recovery in oil prices to near $40/bbl could moderate this trend as some oil wells become economic in low cost areas such as the Permian Basin,” said NGI market analyst Nate Harrison.

“While the ”curve’ of new daily cases of Covid-19 continues to flatten/decline, there has been a recent uptick over the past week, likely due to the protests sweeping the nation. While some speculate the close-quarters gatherings of protesters could spark a new wave of cases, it’s unclear whether a second wave of the virus could lead to lockdown measures being reimposed later this year.

“Volatility in the benchmark Henry Hub futures price has been in decline since the middle of May, with the Bollinger bands contracting the most over the past week. Contracting Bollinger bands, especially when accompanied by lower trading volumes, are often a leading indicator of a technical breakout.”

“Domestic dry gas production has rebounded a bit since bottoming at 82.7 Bcf/d, and has been anywhere between 83.8 Bcf/d and 84.5 Bcf/d thus far in June,” said NGI’s Patrick Rau, director of Strategy and Research. “Meanwhile, industrial and liquefied natural gas demand continue to trend lower, although power generation demand has stepped up to help fill the void. As such, there could very well be a bit of a shakeup in the 2Q2020 rankings versus the first quarter of the year.”

The equation for marketers could be further complicated by what forecasters say could be more active than normal Atlantic hurricane season. Though storms don’t pack the same punch they once did on gas supplies, they now can have a more pronounced impact on the demand side. Already the 2020 hurricane season, which officially began June 1, has produced Tropical Storm Arthur, Tropical Storm Bertha, and Tropical Storm Cristobal, which forced some shut-ins as it crossed the Gulf of Mexico and came ashore in Southeast Louisiana Sunday.