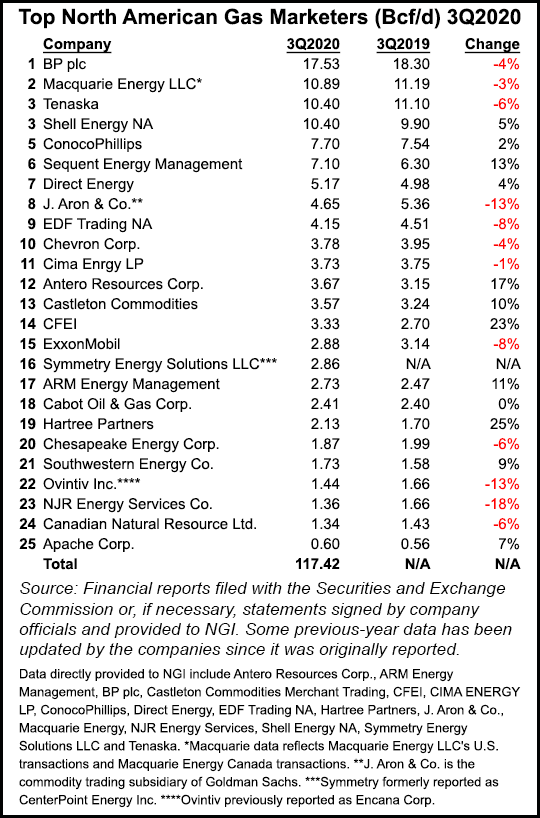 The 24 gas marketers covered in the survey for which year-earlier data were available collectively reported 114.56 Bcf/d for the latest quarter, level with the precise total reached in 3Q2019.

Several of the largest gas marketers reported modest declines for the quarter as flat consumption was more than offset by lower production amid the continued impact of the coronavirus pandemic. Energy Information Administration (EIA) data show that 3Q2020 U.S. dry gas production averaged 89.7 Bcf/d, down 4.6% from 94.0 Bcf/d a year earlier.

Notably, “our annual FERC Form 552 data analysis shows the combined market share of the top U.S. 20 marketers has been trending down over the last decade, and that has been providing something of a volume headwind as well,” said NGI’s Patrick Rau, director of Strategy & Research. “So you have a long-term trend being accelerated by a shorter-term production decline” among the largest players.

NGI ranks marketers on physical sales transactions only, while the Federal Energy Regulatory Commission bases its 552 totals on purchases and sales. According to FERC’s latest data and NGI calculations, the eight largest U.S. natural gas operators in terms of total volumes accounted for 25.5% of the market in 2019. That was down from 26.8% the year before, and well off the 33.0% total share in 2010.

In the 3Q2020 NGI marketer survey, six of the Top 10 marketers — and 12 companies overall — reported lower numbers than in the year-earlier period.

However, prominent players Shell, ConocoPhillips, Sequent Energy Management and Direct Energy, along with several other gas marketers, reported year/year increases. This boosted the total and warded off an overall decline as some firms began to gradually bring back production amid adjustments to the pandemic and expectations for demand increases over winter.

EIA forecasted U.S. dry natural gas production this year is going to average 90.9 Bcf/d, down from an average of 93.1 Bcf/d in 2019. In its forecast, EIA noted that monthly average production in 2020 hit a record in January before plummeting in April amid the initial demand shocks of the pandemic. Output leveled off and started to tick up in the third quarter, however, before climbing back to around 90 Bcf/d in November.

Associated gas production is also expected to slowly increase alongside a recovery in oil production in 2021. Oil output in the United States started to pick up in November, ahead of a December announcement from the Organization of the Petroleum Exporting Countries and its allies, aka OPEC-plus, that they agreed to boost production beginning in January by 500,000 b/d.

“Production increases suggest mounting optimism in energy demand” next year, SAMCO Capital Markets’ Jacob Thompson, a managing director, told NGI. However, “there’s still a lot of uncertainty looking into early 2021. Vaccines will hopefully get out to enough people by spring that we’ll start to see a return to normal, but it’s going to be a slow, bumpy path.”

Rau said data reported by gas marketers could begin to look substantially better in 2021, though this could come with some important caveats.

“Covid didn’t really start to affect U.S. natural gas volumes until late in 1Q2020, and the impact didn’t flush through fully until 2Q2020,” Rau said. Should vaccines prove effective and conditions improve in the spring, “we will then start comparing the far lesser impacted quarters of 2021 to the more impacted quarters of 2020, resulting in some skewed results again next year, only in the other direction. It likely won’t be until 2022 that the year/year quarterly comparable figures will be on an ‘apples-to-apples’ basis.”

Beyond 2021, it likely will take a sustained improvement in demand to continually drive results in a positive direction. Ongoing increases in liquefied natural gas (LNG) volumes will be key, Rau said.

“Obviously, we are running full bore right now, with deliveries to U.S. liquefaction facilities maxing out at more than 11 Bcf/d in recent weeks,” he said, citing NGI data.

“Roughly two-thirds of expected demand growth in the U.S. through 2030 will be driven by LNG trains that are already under construction,” Rau added. “But it will take several years for those to come online,” so the full influence of LNG should develop over the course of the decade.

The supply side, while showing signs of recovery, has a long way to go. West Texas Intermediate oil prices have rebounded to around $47/bbl in December. However, Rau suspects prices above $50 for a sustained period are necessary to drive strong gas production.

“We’ve seen a short-term boost in dry gas production here in recent weeks, thanks in large part to a draw-down of DUCs,” or drilled but uncompleted wells, Rau said. However, “the rig count is going to have to rally from its current level to drive higher production on a more sustained basis. We’ve seen a bit of that in recent weeks, but I believe that’s being done more just to get back to maintenance production levels than it is to drive longer-term growth.

“Also, keep in mind producers are focused much more on their balance sheets these days, and are expected to use free cash flow to bring their debt leverage ratios in line, rather than plowing that back into the drill bit. Production growth is no longer their main goal,” he added. “You just aren’t going to see producers go hog wild on production plans until they’ve cleaned up their balance sheets, and/or crude prices remain high on a sustained basis.”

Bottom line, Rau said, if U.S. supply and demand “are subdued over the next few years, and if increasing competition among marketers continues on its decade long-trend, then the growth in volumes among the largest U.S. natural gas marketers will likely be subdued as well.”