An acceleration in travel and economic activity should hasten the resurgence in global oil demand in the second half of 2021, cutting into supplies and justifying increased crude production, the Organization of the Petroleum Exporting Countries (OPEC) said Thursday. 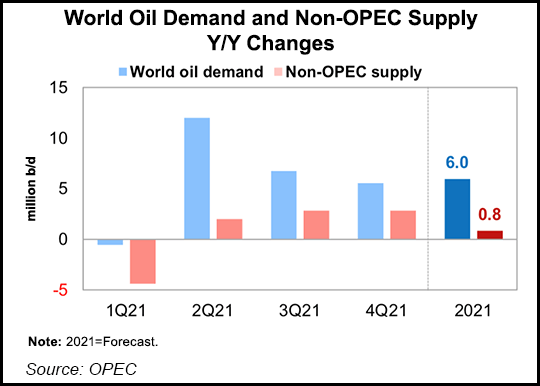 In its closely watched Monthly Oil Market Report, the Saudi-led cartel affirmed expectations it reported a month earlier that successful vaccination programs across the United States, Europe and much of Asia are fueling economic revivals that should unleash pent-up demand and drive increased oil consumption.

“Refiners in most regions showed increases in buying interest on the expectation of a further oil demand recovery with the approach of the summer driving season,” OPEC researchers said in the new report, released Thursday.

OPEC said crude inventories across developed countries sit at 34 million bbl above the average level for 2015-19 but could fall below that five-year average yet this year.

It estimated that global demand would increase by about 6 million b/d in the second half of 2021. Total global oil demand is expected to average 96.6 million b/d. Demand for OPEC crude is forecast to reach 27.7 million b/d this year, 5.0 million b/d higher than in 2020.

The cartel and its oil-producing allies, aka OPEC-plus, are currently executing on a three-month plan to increase production through July. The group is adding more than 2 million b/d into the market between May and the end of July.

The latest estimates are based on rosy economic projections. OPEC forecasts global economic growth for 2021 of 5.5%, led by 8.5% expansion in China, 6.4% growth in the United States and 4.1% expansion across Europe.

Demand confidence has permeated markets, with both U.S. and international benchmark prices hovering near $70/bbl, up more than 40% in 2021. Bulls are betting on “optimism that the strongest demand uptick is ahead of us in the summer season,” said Rystad Energy analyst Louise Dickson.

OPEC, however, did serve up a dose of caution: It noted “uncertainties including the spread of Covid-19 variants and the speed of the global vaccine rollouts. In addition, sovereign debt levels in many regions, inflationary pressures and central bank responses remain key factors to monitor.”

In an updated outlook released Wednesday, the U.S. Energy Information Administration (EIA) said the world consumed an estimated 96.2 million b/d of petroleum and liquid fuels in May, a year/year increase of 11.9 million b/d but still down 3.7 million b/d from May 2019 levels. EIA expects consumption to average 97.7 million b/d for 2021 overall before rising to 101.3 million b/d in 2022.

Overall petroleum demand in the United States has been uneven week/week in 2021. On the whole, however, consumption is rising substantially from last year and crude inventories are declining.

U.S. commercial crude inventories, excluding those in the Strategic Petroleum Reserve, decreased by 5.2 million bbl during the June 4 week. At 474.0 million bbl, inventories were 4% below the five year-average, according to EIA.

U.S. producers have been reluctant to follow OPEC’s lead on production. Still, output rose during the first week of June. Crude production for the week averaged 11.0 million b/d, up 200,000 b/d from the prior week.

“Because prices of West Texas Intermediate crude oil remain above $60/bbl during 2021 in the current forecast, we expect that producers will drill and complete enough wells to raise 2022 production from 2021 levels,” EIA researchers said. “We estimate that 2022 production will average 11.8 million b/d, up from a forecast average of 11.1 million b/d in 2021.”